There are two new substantial changes to weapons in this game.

Firstly, weapons* no longer have durability; meaning they can be used forever, without breaking. Although durability is gone, weapons now have an increased variety of effects.

So instead of worrying about when to wield weapons, the game emphasises picking the best weapon for the given situation.

Secondly, the weapon triangle, which has been present since Genealogy of the Holy War, has been significantly revamped. 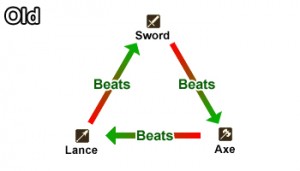 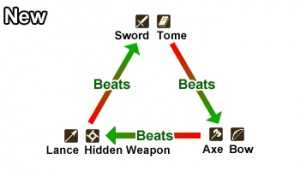 To accommodate this change and vice versa, there is a new weapon type, Hidden Weapon, which encompasses weapons that are easily concealed, such as knives and shurikens.

These new weapons are physically weak, but have the ability to temporarily decrease the enemy’s stats. They can also be used close up or at range. So far, Maids, Butlers and Ninjas are known to use them.

Additionally, Hoshido and Nohr have their own set of weaponry. Nohr’s weapons include series staples, while Hoshido has eastern-inspired variants, such as naginatas for lances, katanas for swords and maces for axes.

Below are some examples of weapons.

Note: It’s likely all Batons have increased Range (unless noted).