To quote the game itself, Arena Assault is a battle arena for advanced players. Your goal is to use multiple teams to clear up to seven maps in a row.

Unlike the Arena, this mode does not require Dueling Swords nor stamina, so you’re free to attempt it as many times as you’d like. However, EXP, Hero Merit, and SP are only awarded on your first run for the day. 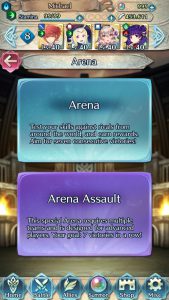 You can access Arena Assault by tapping the ‘Battle’ icon at the bottom of your screen and then hitting ‘Arena Duels’ from the Battle menu. From there, all you need to do is select ‘Arena Assault’ to begin.

Arena Assault essentially combines the Arena mode with Squad Assault. Your goal is to consecutively fight enemy defense teams while maximizing your score.

Like Squad Assault, you must form differing teams for each battle. Duplicate Heroes may not be used, but alternate versions of the same Hero are allowed. If you were to use Ephraim for one battle, you could still use his Legendary version for another. This means you effectively need 28 combat-ready Heroes if you want to safely shoot for a high score.

It is advised to have 28 Heroes for this mode; however, you can choose to use less than four per battle. You could consider this if you haven’t amassed enough combat-ready Heroes yet. The only time you shouldn’t do this is for the very first battle, as that will lead to a much lower cumulative score. 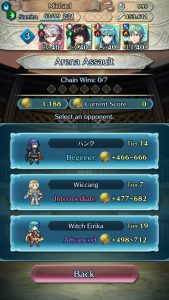 The strength of your opponents is determined by the strength of your starting team. This means that if you want a better score, your first team should include units with high stat totals, high SP skills, and/or Heroes with merges. However, this also means each consecutive battle will become more difficult unless you have a good amount of strong units.

Finally, unlike the Arena, bonus units are not used in this game mode. 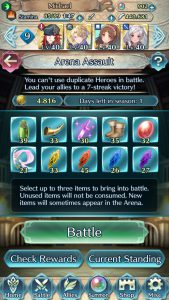 You gain these special items when you defeat teams that include level 35+ enemies. The items you gain are random and the number you acquire is based on how many consecutive wins you earn. If you bring an item along and do not use it during your battles, you will retain it after your current Arena Assault run ends.

Some items are extremely powerful and using them does not negatively affect your score, so be sure to bring three along for serious attempts in Arena Assault!

After you’ve assembled your first team, it’s time to select your opponent! Just like with Arena battles, you’ll have three options once you’ve tapped the ‘Battle’ button: Beginner, Intermediate, and Advanced. Each difficulty will display a lead character, so you’ll know at least one of the units in the upcoming fight. 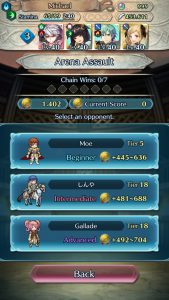 Beginner teams will have units with lower stats than your own and as such, will award you less points. Intermediate enemies will have stats on par with your first team, while Advanced will have higher stats, but offer the greatest amount of possible points.

Rather than display a set number of points you can earn, the difficulties will depict a range. If every one of your Heroes survive, you’ll achieve the maximum score. Each death on your team will lower the total points you earn for that particular battle.

Beyond the First Battle

Congratulations! You’ve won your first battle! Now, on to the second one! After the first battle, select your next opponent in the same manner you did before. 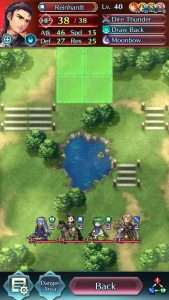 Luckily, from the second battle onward, after you have chosen your opponent, you can preview the map and all of their units. This makes it easier for you to choose who to deploy, rather than going in blind with your team like Arena matches.

The matches continue until you complete seven battles in a row, lose all of your units on a map, or choose to surrender either mid-match or after winning.

Your final score for each Arena Assault is the sum of the points you earn after every battle. Like the Arena, winning more consecutive matches will earn you a better score. 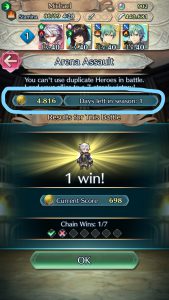 The seasons for Arena Assault align with the Arena, meaning every season begins each Tuesday at 7:00am GMT and ends each Monday at 11:00pm GMT. During the eight hours in between seasons, Arena Assault is inaccessible so the game can tally points for the week and distribute rewards based on a player’s rank.

Speaking of rank, the highest score you earn for each season is ranked against other Fire Emblem Heroes players and you gain rewards in accordance with your rank. The rewards in Arena Assault are Sacred Coins, Refining Stones, and Hero Feathers. 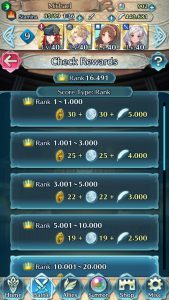 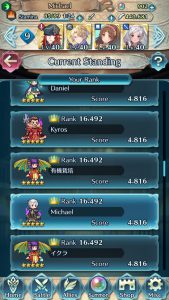 You can also view your exact placement by hitting ‘Current Standing’ in the Arena Assault menu.

Arena Assault can be tough, but the rewards are plentiful! Shoot for the highest rank!