Tempest Trials+ is a mode where you battle through multiple maps in a row. After you clear one, the next will appear immediately. The number of consecutive battles you wage depends on the difficulty you select. The final map of each difficulty is always the same and features the ‘Boss’ of the current Tempest Trial+. 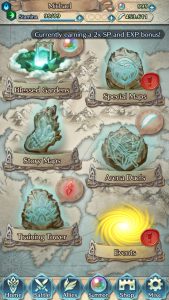 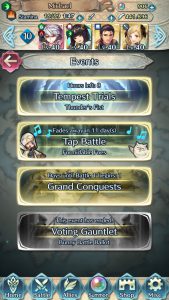 Each Tempest Trial+ lasts for 10 days.

If you would like to attempt a Tempest Trials+ run, tap ‘Battle’ from the home menu and select the ‘Events’ icon from the battle screen. If Fire Emblem Heroes currently has a Tempest Trial+ running, the icon should be highlighted, and you may select it.

When you enter the Tempest Trials+ menu for the first time, you are treated to a cutscene. This cutscene segues into the mode itself and gives you an idea of what theme or Fire Emblem game the current Tempest Trials+ is based. 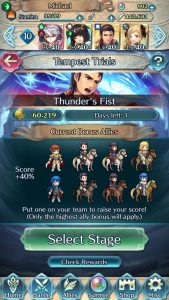 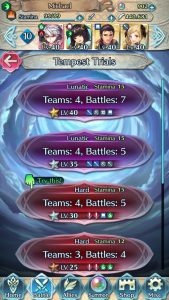 From there, tap ‘Select Stage’ to begin. You’ll see a number of difficulties: Normal, Hard, and Lunatic. As the difficulty increases, so do the levels of the enemies you’ll face, the number of battles you’ll engage in, the stamina cost, the maximum score possible, and the amount of teams you may use.

More detailed information about each difficulty is listed below.

The game will also suggest a recommended stage for your team via a “Try This!” indicator. If this is obtrusive, you can disable it via ‘TT Difficulty Tip’ in the settings.

As previously stated, Tempest Trials+ tasks you with facing a series of consecutive battles against randomized enemies. After you clear a map, the health and charges left on a Hero’s Special will remain the same. Fallen allies will not be revived between maps, so be careful! 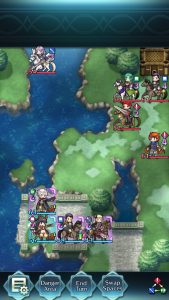 Should all of the units in your current squad be defeated, you can choose a new team of Heroes and try the map again. Each difficulty will tell you ahead of time how many teams you can use. If you lose all of your teams, it’s game over!

Heroes that were defeated may not be used in future teams of your current Tempest Trials+ run.

If you lose a battle, any enemies you defeated on that map will not come back when you deploy your next team. In addition, all foes will have their current HP reduced by 20% to make the battle easier.

As you may have noticed, on the home screen for Tempest Trials+ are a number of units designated as ‘Bonus Allies’ available to use. Fielding a Bonus Ally on your Tempest Trial+ team offers a number of benefits.

First, if you use one of the listed Bonus Allies, the Hero will be granted a stat boost of HP +10 and Atk/Spd/Def/Res +4. 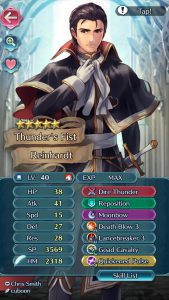 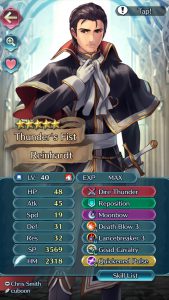 Bonus Allies will also always earn double EXP and SP, which stacks with double SP days, so take advantage of it!

Using a Bonus Ally will also multiply the total score you earn for each Tempest Trial+ run by 1.4. More details on that are listed in the ‘How Scoring Works’ section.

After every daily reset, it’s important to note you will receive a sizable boost regarding your first two Tempest Trial+ runs. 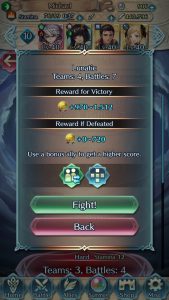 These first two runs will award all allies, not just bonus ones, a stat boost of HP +10 and Atk/Spd/Def/Res +4. All allies will receive double EXP and SP, and the score you earn will be tripled.

The difficulty you select gives you a range of possible scores you can achieve based on several factors: Difficulty, Maps Cleared, Speed, Survival, and whether or not a Bonus Ally was used. Each of these areas is ranked and factored into your overall score for your current run. 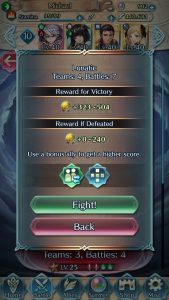 Even if all of your teams are defeated, you will still obtain points based on your current progress when you lose.

As mentioned, your first two Tempest Trials+ runs each day will have their scores tripled, so go for broke!

So, we know the categories for calculating your score, but how exactly do they work?

First, each difficulty offers a base score dependent on difficulty.

After your base difficulty score has been set, you receive a multiplier to that score based on how many maps you clear.

The next multiplier is based on your speed. This rank hinges on how many turns it took you to complete the trial.

Note: Turns spent on failed attempts do not count towards your total. If one of your teams falls and you call in another one, your current number of turns will equal what they were when your previous team entered the map.

The ‘Survival’ category refers to the current team being fielded in your run. While the name may imply total individual survivors, the game only ranks you based on your team. This means even if only one person on your first squad survives and completes the trial, you will still obtain the max rank for Survival.

One rank is lost for each eliminated team.

Finally, if you opt to use a Bonus Ally in one of your teams, you receive a flat 1.4x bonus to your score.

You will not receive additional multipliers for fielding multiple Bonus Allies, although they will all benefit from the Tempest Trial+ stat boost.

After you have either completed the final map or all of your teams have been defeated, your score will be tallied and presented to you on the ‘Results’ screen. 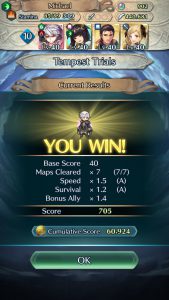 The score you earned on your run will be added to your cumulative score for the current Tempest Trials+ and will increase your overall rank.

Some of the biggest incentives to participate in Tempest Trials+ are the vast number of rewards you receive. There are numerous milestones to reach which are based on your cumulative score.

To see the entire list of rewards and the points you need to reach them, tap ‘Check Rewards’ from the main menu of Tempest Trials+. 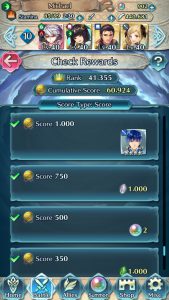 Completing all score rewards usually offers 42 orbs, 80 Sacred Coins, 11,000 feathers, a plethora of crystals, three unique Sacred Seals, and a Tempest Trials+-exclusive unit in both a 4★ and 5★ rarity!

To view your current rank, go to the ‘Check Rewards’ screen and tap ‘Score Type: Score’. Select ‘Rank’ to see how you fare compared to other players. 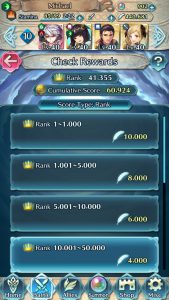 The possible rewards available for all ranks are as follows:

With so many rewards available, it’s definitely in your best interest to shoot for a high cumulative score!