Blessings are rare consumable items that empower Heroes if certain conditions are met.

Blessings can be obtained after summoning a Legendary Hero, via the Blessed Gardens, as Tempest Trial rewards, or via quests. To use them, you must go to Allies – Advanced Growth – Confer Blessings.

There are four types:

Each hero can only receive one type of blessing. If a different blessing is applied, the previous blessing will be lost. 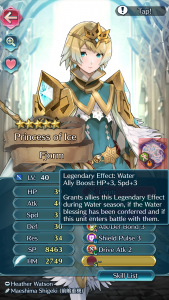 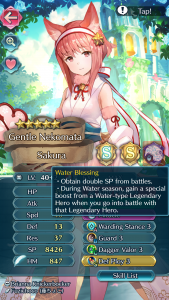 Heroes that have received a blessing–and Legendary Heroes–will have an elemental crest towards the right of their status screen, as well as below their weapon icon in their small portrait.

In addition, the season (shown in the top-left corner of the screen before a battle) must also match. At any given time, the season will feature two of the four elements. The seasons change every week, following each Arena season.

Typically, one of the elements will remain the same for about 4 weeks and it will match the element of the newest Legendary Hero. Meanwhile, the second element will cycle in such a way that there won’t be more than a 2 week gap since the appearance of any element. 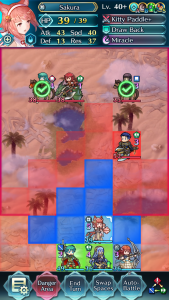 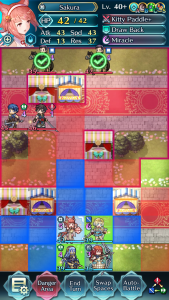 For example, a Hero with a Water Blessing will only receive a stat boost if they are fielded with a Water-type Legendary Hero such as Fjorm and while the current season is the Water Season.

If any of these conditions are not met, no stat boost will be granted. However, a hero that’s been blessed will always earn double SP regardless of the conditions–and so too will Legendary Heroes.

Furthermore, only heroes that have been blessed (and Legendary Heroes) can battle in the Blessed Gardens.