There exists a hidden jealousy system, which affects love growth in this game.

The Jealousy system comes into play whenever a second female waits adjacent to the female in a male-female pair. 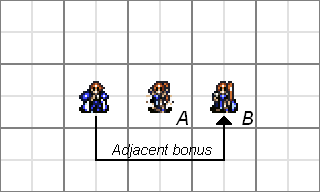 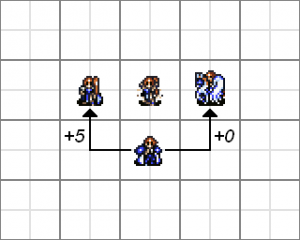 In this case, Tiltyu (the Thunder Mage) has the highest priority for Claude (the High Priest) and will snatch the adjacent bonus from Sylvia (the Dancer) first. Since Sylvia no longer has a bonus, Fury (the Pegasus Knight) will not be able to snatch anything. Putting Fury there is basically fairly useless. 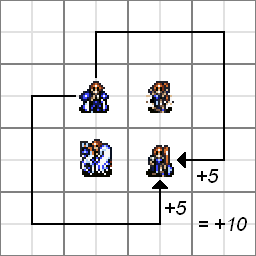 In this formation, Tiltyu (the Thunder Mage) will get both Sylvia (the Dancer) and Fury’s (the Pegasus Knight) adjacent lover bonus (gaining a total bonus of +10). This is a method of greatly speeding up love growth (since instead of the normal +5 bonus, you can get +10), which may be useful in ranked playthroughs or simply just to get couples earlier.

First Generation (If you’ve reset the game at least once)

“Reset the game” means closing the game and then loading a saved game file. If you’re playing on emulator, chances are you won’t ever have to reset the game (since you can just load savestates, which are snapshots).

Second Generation (If you’ve reset the game at least once)

Notes: The following tables were provided by FionordeQuester. You can also find more information in this forum topic.

One important consequence is that, as long as the game hasn’t been reset since starting the 2nd Generation, CelicexYuria will have higher priority than both CelicexRana and CelicexLakche.

Therefore the CelicexYuria pairing can eventually be achieved by manipulating the Jealousy sytem (although it appears the initial love points for CelicexYuria is set to 0 instead of 490).

Otherwise, if you reset, all the girls have equal priority with Celice.

If you can understand Japanese or Chinese, these links on the Jealousy system might be interesting: