At one time, Chalphy, one of Grandbell’s many dukedoms and home of the descendants of the Crusader Baldo, rescued the continent of Jugdral from a great crisis. The Grandbell army, along with Prince Kurth and Chalphy’s Lord Vylon, had left on a campaign to calm the fighting in the east. Taking advantage of this situation, the Kingdom of Verdane trespassed into Grandbell and attacked Jungby castle, capturing Jungby’s Lady Adean. In order to save Adean, Sigurd of Chalphy, and his loyal knights, leave in pursuit of the Verdane marauders. However nobody could have predicted the destiny that was to follow.

Following the success of Mystery of the Emblem, the next game in the series was released for the Super Famicom. Instead of directly continuing the story and gameplay from the previous games, Genealogy of the Holy War completely changed many aspects. This game is possibly the most popular one in the series, and is widely recommended by English fans that played it via import or emulation. The game spawned three manga series and a trading card game, and a set of figurines was released more than 10 years after the game’s initial release.

Genealogy of the Holy War takes place in the continent of Jugdral, a different land to the previous game, although it shares similar world views. In Jugdral, there exist many territories, each with their own background and alliances. The story had a larger focus on politics, compared to others in the series, with expeditions to aid allies, broken alliances, genocide, and one man out to unite the world. However it is probably more famed for its bold and unique Love and two generational systems, explanations of which will come later.

As mentioned earlier, the game featured many changes, which were refreshing and heralded a huge improvement for the series. Characters were now more personalized, both statistically and story-wise, so you now care more for the characters. The gameplay received several upgrades, including special Skills and the now-standard Weapon triangle. The graphics were much improved from Mystery of the Emblem, and is most evident in the dynamical battles. Basically this is one Fire Emblem game that you should try out if you can.

The greatest deviation from the usual Fire Emblem gameplay, and the one that made the game stand out from all the rest. A two generational system featured, where the characters of the first generation (the parents) affected the stats, skills and starting equipment of certain characters in the second generation (the children). This also helped to enrich the plot, with the story spanning two generations of warfare. However the greatest impact was on the variation of children, with players encouraging different combinations of parents to obtain the most effective children.

Similar to Supports in later games. Most male and female characters could be paired up, and become lovers, by fighting alongside one another and activating character and case-specific conversations. When they finally become lovers, characters can randomly perform a special critical attack when next to their partner (siblings also have a similar attack). Some lovers may also give their partner rare items or stat boosts. The biggest impact of falling in love is that the females in the first generation will give birth to children in the second generation, whose attributes depend on both parents. Failing to pair the females up results in receiving weaker “substitute” characters.

The game featured enormous chapter maps. In other Fire Emblem games, these maps could take the place of 4 or 5 chapters. Each chapter includes several castles, which are usually seized in a particular order. After a castle is seized, an event usually occurs to prompt the player to seize the next castle (and adds tons of enemies). While the maps can be large, the battles usually don’t feel too drawn out, as the enemies are well spread out and lots of things are happening.

Movement range was first shown in Mystery of the Emblem, however at times it wasn’t obvious what enemies could be attacked. Genealogy of the Holy War introduced attack and healing ranges for both the player characters and enemies. If a character can both attack and heal, the ranges could easily be toggled, which is useful for getting out of the range of enemies with status-afflicting staves.

Not so useful for the player, but quite cool nonetheless. In earlier games, only the Player phase (when the player makes moves) and Enemy phase (when the enemy, controlled by the computer, makes moves) are shown. This game, however, featured multiple Enemy phases, for different enemy armies, as well as Allied (green) and Neutral (yellow) phases. Allied, or NPC, characters act just like player characters, but are controlled by the computer. Neutral characters are usually just for show, or to block passage, as they don’t do anything and cannot be attacked by the player.

Each chapter begins in a main castle, which acts as the base of operations. There, players can house and manage their army, buy items, check fortunes and fight in the arena. Most of these options can be used in other castles seized by the player, but characters must use up their turn to use the services. Usually the enemy will try to seize the main castle, but you can have a single character guard the castle. If the main castle is seized, a Game Over is received.

Arenas featured in earlier games, but the Arena in this game is quite unique. The Arena can be accessed from castles, although it is only available after the first chapters. Each chapter’s Arena is tiered, and contains seven pre-determined enemies. Characters challenge the Arena enemies separately, rising up the tiers as they defeat each enemy. A character’s individual progress is recorded and, once they have beaten the highest tiered enemy, they can no longer challenge the Arena during that chapter. As such, players cannot send the same character into the Arena forever, and it is actually recommended to have all characters compete and go as far as they possibly can.

Unlike in other games, characters could not trade weapons or items on the battle map. The only way to swap weapons or items was by selling them in the Pawn shop and having a different character buy them. However since you sell items for half their worth, and buy them back at their full worth, it is recommended for characters to personally obtain weapons or items, whether by defeating bosses or visiting villages. On a similar note, each character also holds their own Gold 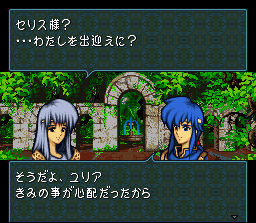 Lovers conversing in the main castle

Many characters and some classes possessed special skills that could affect battles and more. Many of the battle skills, such as Moonlight Sword (which negates the enemy’s Defense) activated randomly so they acted like pseudo-criticals. However some skills, especially the non-battle ones, are always in effect. Also, the ability to double attack and perform critical attacks was limited to characters that had the Pursuit and Critical skills respectively.

A now renowned feature of the Fire Emblem games. Basically each weapon type fared better or worse against other weapon types. Fighting stats are increased if an advantageous weapon type is used and, conversely, they are decreased if a disadvantageous weapon type is used. The “triangle” part refers to the rock-paper-scissors design. For physical weapons, Sword beats Axe, Axe beats Lance and Lance beats Sword. For magical weapons, Fire beats Wind, Wind beats Thunder and Thunder beats Fire. Bows, Light and Dark exist outside the triangles, although Light and Dark both beat Fire, Thunder and Wind.

The maximum obtainable level for characters was raised from 20 to 30. Although this doesn’t seem like a major change, when a character promotes to a higher class their level is not reset. Most characters can promote when they reach level 20, and it is highly recommended to promote as soon as possible, since there are no benefits to waiting like in other games. Also since the level cap is not reset, promoted characters can level up as much as non-promoted characters. In fact units that are already promoted have no disadvantages whatsoever.

Previously, physical and magical characters used the same Strength stat to determine their damage output. One flaw, seen in Gaiden, was when female Mages with a high Strength stat promoted to Priest and dealt massive damage with swords. In this game, the Strength and Magic stats are now separate. For most characters, one of the two stats has no effect on their performance, except when physical characters attack with magical swords. However some hybrid classes exist that can attack with both physical and magical weapons, such as Mage Fighters and Mage Knights.

Instead of being fixed at 20 or 40 in previous games, stat caps now vary depending on class. Thus stat caps are no longer the same for all characters and class. This helped to make classes more individualized as, for example, Generals can never cap their Speed as high as Swordmasters.

The Weapon Skill stat from earlier games is now gone. Instead, the types of weapons that can be equipped is determined by a ranked weapon level system. The higher a character’s weapon rank in a particular type, the better weapons of that type they can wield. A character’s weapon rank values are determined by class and holy blood. Unlike later games, weapon ranks only rise during promotions. The introduction of weapon ranks also divided all the weapons into physical categories, such as swords, lances, and the different schools of magic. 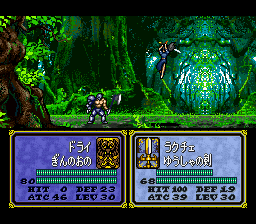 Battle against a powerful foe

An element unique to Genealogy of the Holy War. Certain characters possess holy blood, as proof of their descent from the Twelve Crusaders. Holy blood is divided into major and minor variants. All holy blood enhance growth rates in particular stats–the distribution depending on the blood type–with major holy blood awarding double the growth rate enhancements compared to minor. Holy blood also raises weapon ranks for their Crusader’s weapon type. Minor holy blood raises weapon ranks by one whole rank, while major holy blood raises the weapon rank to *, allowing for all (regular) weapons of that type to be equipped. Finally, holy blood is inherited, which further complicated the children-making.

Another benefit for those with holy blood was the presence of holy weapons, which gave huge stat boosts, and some special Skills. +5 stat boosts in later games pale in comparison to the +10 and +20 boosts in this game. However if you’re worried that the game’s balance is completely destroyed, bear in mind that the weapons cost a fortune to repair and a handful of elite enemies have some. Also the holy weapons could only be equipped by those with major holy blood, and the corresponding holy blood of their Crusader’s weapon (eg. major Baldo blood is needed to equip the Tailfing).

Mounted units (on horse, pegasus or dragon) had the advantage of being able to use up their remaining movement after performing actions. In later games this was reduced to all actions except attacking and healing. Having mounted characters attack and run away was quite a popular strategy, especially for enemies.

Last, but not least, Genealogy of the Holy War features features the largest (and one of the best) soundtracks out of all the games, with a total of around 114 tracks. Despite the large quantity of tracks, the tracks are very good and memorable, which is mainly thanks to the game’s epic and memorable storyline and setting. I’m sure many of the chapter themes (both player and enemy) haunt players forever.