Notes: This does not change the course of the game.

Before they leave in Chapter 4, Cuan and Ethlin should be around Level 30. More importantly they need good Speed and Luck stats.

During Chapter 5, ignore Vylon and have him get killed before reaching Sigurd. Vylon dying will change the AI of the Lenster soldiers, so they will behave like normal units and attack (also Vylon will become their leader). Carry on with the chapter as usual, until you reach Lubeck.

Before conquering Lubeck, Fury should have the Leg Ring and be damaged. Position her as far south of Lubeck as possible and have Sylvia next to her. On the next turn, after conquering Lubeck, make Fury move a little bit south and have Sylvia dance for her to maximise her movement. The Lenster soldiers that appear, should prioritise healing Fury, so they will move towards the north west. This will make it harder for the Dragon Knights to attack Ethlin and Cuan.

Keep moving Fury south and bring some other units as well. For the rest of the turns it’s mostly luck. You’ll want Ethlin and Cuan survive the initial onslaught of Dragon Knights- Ethlin so Cuan still has the Gaeborg and Cuan since he can damage Trabant. When they reach them, have Fury and other healers continuously heal Cuan/Ethlin.

Eventually the leader of the squad should take some damage. You’ll want to manipulate the situation so that either Ethlin or Cuan takes him down. This is so the Dragon Knights lose their leadership stars and have low accuracy against Cuan/Ethlin. With the squad leader down, Cuan and Ethlin should have little problem with the rest. However this might take a couple of tries.

Finally this leaves us with Trabant. The only way to defeat Trabant is to have him attack Cuan on his turn and Cuan attack Trabant on the following NPC turn (since Trabant will heal all HP otherwise). Cuan also has to activate Continue on either attack (since he can’t double attack and needs three hits to kill Trabant). This is tricky since Trabant will prioritise attacking Ethlin…

The method I suggest is boxing Trabant with four characters (don’t worry, Trabant won’t attack any of your characters), then box Ethlin. Trabant can’t move, but Ethlin can, so be careful. Then unbox him and let him fight Cuan. Then end your turn again and let Cuan attack Trabant. After many tries, Trabant should fall. With Trabant fallen, that’s all there is to it… or is it?

Actually Ethlin and Cuan will continue moving north west to Phinora castle. If they reach it, they will conquer it. This is both amusing and bad at the same time, since you can’t conquer Phinora and continue the game… 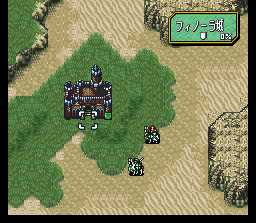 So that’s how you can make Cuan and Ethlin survive (without cheating). Too bad they don’t really- if you did conquer Phinora, they would vanish as if they died.