Growth rates are a set of hidden stats that govern character growth in every Fire Emblem game.

(Note: In Radiant Dawn, the game is rigged so that you always gain at least one stat up during a Level Up.) 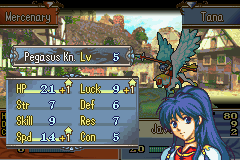 Tana Levels Up. Her HP, Speed and Luck growth rates are the highest, so they have the most chance of increasing.

When it comes down to it, character growth in Fire Emblem is basically random and all down to chance, although there is restriction in the form of growth rates. There are no simple growth patterns to be followed like in many other RPGs.

To prevent having terrible characters due to bad luck with Random Number rolling, some players may choose to reset the game when they receive a terrible Level Up (or many of them in a row). This is what it commonly means to “RNG-abuse” – in other words, the player doesn’t accept what the Random Number Generator has immediately provided and instead repeats the Level Ups until they get desirable ones (such as for making Wi-Fi squads in Shadow Dragon).

Unlike playable characters, generic enemy or NPC characters don’t have their own growth rates. Instead, they use class growths to generate their stats.

Generic enemy or NPC characters also don’t Level Up like playable characters do, but they do receive a series of hidden Level Ups at the beginning of the chapter – the number of which is proportional to their displayed Level. For such characters, class growths are the percentage chance (approximately) of increasing a stat by +1 during a hidden Level Up. It is for this reason that enemy stats usually vary slightly from time to time (eg. when you replay the chapter).

In Shadow Dragon, there are two types of class growth rates – the above and player versions (which are used to calculate the effective growth rates, see later). Otherwise, class growth rates are only used by generic enemy or NPC units (and for calculating Hard Mode bonuses).

If a character has a growth rate of 100 in a stat, unsurprisingly that stat will always increase by +1 during a Level Up. Except, of course, when the stat has reached its maximum value.

This only features in Path of Radiance. In Fixed Mode (unlockable after beating the game at least once), character growth rates function in a different manner – this time they are treated as points, which accumulate with each battle. Once a character reaches 100 points in a stat, that stat will increase by +1 when they Level Up. After which, 100 points are deducted from that stat. Just like normally, stat increases of +2 and +3 are also possible.

The character’s equipped weapon and accessory, as well as the type of enemy class they fight can alter the growth points that they receive (usually by +/- 5). The character’s own growth rates generally give the most points, so characters will tend to reach their “average stats” in this mode.

For more information on Fixed Mode, please check this page.

These only appear in Shadow Dragon. Often, the effective growth rates for a character can be negative (such as Magic or Resistance growth for physical-based units). When a character Levels Up, stats with a negative growth rate won’t ever decrease since the game treats them as 0% growths exactly.

For more information on Dynamic growths, please check this page.