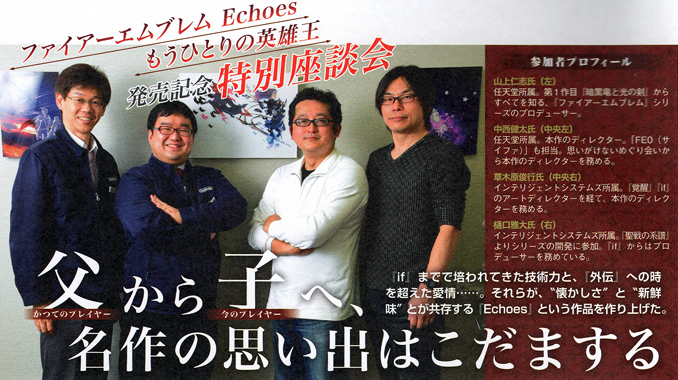 Memories from the father (former players) echo to the children (new players).

With all the work put into the series up to Fates, Gaiden finds some love for. Echoes comes to be with a mix of both “nostalgia” and a “fresh taste.”

Adjusting the steep difficulty level for the current generation through a remake.

Q: Please tell us the story of how this project came to be from the start.

Mr. Hitoshi Yamagami (from now on: Yamagami): After the completion of Fire Emblem: Fates (from now on, just Fates)’s development, I started thinking of a game for the Nintendo Switch. However, it was still too early to begin development of titles for that system. While thinking of what to do, several people from Intelligent Systems approached me saying: “There are many things we could not do in Fates [that we wish we could have]. We wish to implement them in a remake for Gaiden.” Gaiden had not been featured much up until now, and I figured if we got started on development at that time, we would be able to release the game before the new Nintendo Switch would come out. So, we began development.

Q: To be more specific, around when are we talking?

Yamagami: Back then, we thought: “Okay, let’s do this in a year and release it September 2016.”

Higuchi: But there was no way I could meet that deadline while ensuring ultimate player satisfaction. (Laughs awkwardly).

Q: What was it that you wanted to do with Echoes that was not in Fates?

Mr. Toshiyuki Kusakihara (from now on, Kusakihara): For one, adding dungeons and allowing the character to roam around freely. In Fates, you can move around “My Castle” and see it over your shoulder view, but, the truth is by then we had already developed a fully functioning roaming function. However, it was not up to the standards we wanted, and so Fates was left with just being able to observe your surroundings [rather than move around in it]. Gaiden meanwhile was already built with free movement in mind, so we figured it was a perfect fit.

Higuchi: In addition to that, Gaiden would be celebrating its 25th anniversary. While already released on the Virtual Console for people to enjoy, we had the idea of reconstructing it with the technology we had through Awakening and Fates. That’s basically how the idea for this remake came to be.

Yamagami: Once we decided upon Gaiden, we invited the director for Fates, Mr. Yokota*, to reprise his role for this game. However, he was caught up in another project at the time and so we were left with an opening. It was during that difficult time that Nakanishi came forward saying, “Hey, you know, I really like Gaiden. Let me tell you what that game means to me…” and then he went on to talk about his father…

*Genki Yokota, part of Nintendo. Director of Awakening and Fates. Outside of Fire Emblem, he directed Xenoblade.

Mr. Kenta Nakanishi (from now on, Nakanishi): Wait. Wait. You want me to recite that, Mr. Yamagami?

Yamagami: I’m sure you were just waiting to talk about it! You had that look on your face. (Laughs)

Nakanishi: My father died when I was really young. I remember, though, that he loved Fire Emblem. He is the one who got me interested in playing the series, and taught me how to play. When my father passed away, the latest game in the series was Mystery of the Emblem. I included a copy of it as part of other memorabilia with his coffin. After that, when sorting through the things he left behind, I came across his copy of Dark Dragon and the Blade of Light, as well as Gaiden. Needless to say, I reminisced about the times with my deceased father as I played through them. As such, I have an incredibly strong emotional attachment to these two games.

Q: Was his save data still on it?

Nakanishi: Yes, it was.

Yamagami: So when we heard that, we couldn’t help but say “Yes, you can definitely have this job!” We just couldn’t help it, after hearing that story. But it also helped that he was quite knowledgeable about the franchise in general. So we figured it was okay.

Kusakihara: I also have fond memories of the first two games. Going back to the time of Dark Dragon and the Blade of Light’s release, I remember I lacked a Famicom. I would have to go to a friend’s house to play it. I could never make it to the last level… And then Gaiden came out. I was so determined to play it through that I ended up borrowing my friend’s console and game, and then played it on a small five-inch black and white monitor while staying hidden from my parents. (Laughs). I remember it being really difficult since I couldn’t differentiate between enemy units and allies because it was a black and white monitor. After all that I finally got to play to my heart’s content –and then was quite surprised to hear that there was now a sequel coming out to the first one I never beat. It was time to go back… (Laughs).

Nakanishi: Gaiden is pretty different from the other games in the series.

Yamagami (While keeping a forced smile): That’s right. Completely different. I was in my second year at the company back during its development. I would have to take the last train every night after I was added to the debug team. We were all pretty bad at the debugging thing back then. I was originally added as part of the debug team for Dark Dragon and the Blade of Light, so figured I’d do better this time. We cut it uncomfortably close to that game’s eventual release. So building on that experience, I was all set to debug Gaiden well before the deadline. But then color me surprised –all the rules of the game were completely different! To add salt to the wound, it was much harder than the first Fire Emblem game too. I’m the meticulous type who takes it very slowly and thinks about every step. So I would reset over and over again each time someone died (Laughs). I only ever got to see the ending once. My memories of the game are rather painful, so I got cold feet when I heard that a remake for Gaiden was suggested (laughs), but it was a big relief when I heard it would not be that difficult this time around.

Higuchi: Certainly, Gaiden left many with the impression it was too difficult.