It’s not New Gaiden, but instead a title that can be the same around the world.

Q: What was your aim with the title Echoes?

Nakanishi: Well, when Gaiden came out, it was just Dark Dragon and the Blade of Light before it. Fast forward over ten releases later to modern day, and it can be confusing which Fire Emblem’s ”gaiden” this is! We wanted to emphasize its status as a spin off without using the word “gaiden”, so started to think hard about it…

Translator’s Note: Gaiden is a Japanese word that basically means “side story.” It is the word for “sidequests” in Blazing Blade and other FE games for instance. So you can see why this may cause confusion for the Japanese players.

Kusakihara: A lot of the recent Fire Emblem games all have extra maps called “gaiden chapters,” so we feared players being left very confused. So Mr. Nakanishi specifically told us to avoid calling it New Gaiden.

Yamagami: Avoiding calling it New Gaiden is something we had in mind from the start of development. At the same time, we wanted a title that the rest of the world would also use, so wanted to settle on an English word. Somewhere in that conversation, the word “echoes” surfaced. We imagined it was fitting as older games could now “echo” to the modern players. We were very pleased with the choice, and, if there were to be more remakes in the future, we figured we could use the Echoes title again.

Q: What were some of the other names you had in mind?

Nakanishi: Well we wanted something that keeps the feeling of a “remake.” So one idea was attaching “Re:” to the title. It was pretty popular with the development team, but the foreign branches suggested “再度(saido)*” instead, and so it was out of the final short list.

Higuchi: There was also an idea to simply use a capitalized “G” (for Gaiden) as the title and leave it at that, but that idea didn’t get very far.

Reminiscent of Gaiden, and yet for young fans of the series too

Q: Mr. Yamagami, as the producer striving to ever expand the audience, what sort of plans do you have with this game?

Yamagami: This time, the aim is to get the fans that joined the Fire Emblem series since Awakening to be made aware of the fact there are indeed games that came before it. As such, we wanted to implement familiar mechanics, but at the same time retain what made Gaiden what it was. But a major focus was reducing the difficulty level from the original to make it something more like what new fans could look forward to. But of course we are not just focusing on the new players, but those who also had played this game in the past.

Q: And in addition to that, the visuals have evolved quite a bit with Fates, and yet in this game they retain a sort of nostalgic charm to them.

Higuchi: The weapon triangle as we know it in the series started in Genealogy of the Holy War, so Gaiden lacked it. Weapons had few unique characteristics, and terrain was very important in influencing the outcome of a battle. We had to seriously take these factors into consideration this time around. Some may find these features nostalgic, while others will find them brand new. We have seen both reactions from our in-house test players.

Kusakihara: The mechanics and such in Fates are rather complicated, so we wanted to return to more simplistic gameplay in a way. It became very user-friendly, and at the core retains the essence it had all those years ago.

Q: Did you have to go back and research Gaiden for the remake?

Kusakihara: Of course. We had to refer back to Gaiden over and over again, and discovered it was quite well done. For example, it really is hard attacking a fortress. The archers hamper invaders rather well. There is also terrain that really hinders movement, which has a great effect on enemy (and allied) offensives. There is also the feeling of realistic battles in narrow hallways where people barely have room to move and yet still have to fight to the death. So to stick with that, we did roll back to a system without the weapon triangle for one that favors terrain as the central strategic influence instead. So now we get things like aiming to position units on the best terrain while watching out for mages (who are not affected by the terrain) and so have to prepare archers to counter them, etc.

Higuchi: Well we added some things that will influence accuracy. Things like support bonuses and battle skills will increase the breadth of the game, we feel.

Nakanishi: In addition, character growth rates were really bad in the earlier Fire Emblem games. It was common to only get a measly one or two stats increased per level up on average. We agreed it was better to change this up to more modern standards.

Higuchi: While we made improvements overall, things like archers’ range remains from Gaiden.

Q: With new things like better growth rates and skills that didn’t exist in the original, did you have to consider tweaking balance from the beginning of development?

Kusakihara: We based it on the original work and made our small adjustments from there. However, with the growth rate adjustments, there comes a big discrepancy between allies and enemies later in the game. So we added some (somewhat unreasonable) components in there to balance it. For instance, “Megaquakes” and the Witch’s Warp*. Also, the AI was originally customized to be like Fates, but we purposefully tweaked it to be more like Gaiden’s instead.

*A gimmick from Gaiden. Megaquake would damage everyone on the map. Witches meanwhile would warp anywhere on the map unimpeded.

Q: Why did you decide to ask Mr. Hidari to be the character designer this time?

Higuchi: Well, we kept hearing Kusakihara singing his praises, saying that his artwork has a great charm to them. We heard of him when working on the Einherjar Cards* in Awakening, but he was too busy so it was a no-go. When working on FE0 (Cipher), we had another opportunity to ask him, but the timing didn’t line up well there, either… This time, though, we set up a meeting with him in advance, and the timing happened to line up very well.

*Add-on content in Awakening. You could use them to summon heroes from other worlds (=past games).

Q: Sounds like quite the drama! What sort of topics were discussed at the meeting with Mr. Hidari?

Kusakihara: Quite a few things, actually. Things like discussing characters that wear armor to how units would look moving around in full view. We were also pretty detailed in our explanations to him [as to what he could expect].

Q: Did his work go smoothly, then?

Kusakihara: There were several retakes for Alm’s design, but after that Mr. Hidari got a handle on things and was fine on his own.

Q: Does the final design or Alm differ significantly from the initial one?

Kusakihara: The current one is actually the fourth take. The first time, he was rather scantily equipped, so I asked him, “Please add more armor on him.” But then he ended up a little too armored. Then I asked, “Make him look more like a main character may look.” So, his armor became rather extravagant. After these few takes, the final design we settled on had some elements from each of the previous steps combined into one.

Nakanishi: When one thinks about where Alm stands, it becomes even harder to settle on a design. He has the rare honor in the Fire Emblem series of being a protagonist that is not part of a royal family. As such, we wanted to portray him as one who has to work to gain recognition as a leader. With that in mind, a major emphasis during his design stages was that we did not want to give him a princely appearance from the start. Mr. Hidari may have had a bit of trouble trying to find that middle ground.

Q: Did the other characters live up to the image everyone had in mind?

Nakanishi: Personally, I was most surprised by the changes to the three villagers. Kliff, especially, went from a guy with an overbite to this really pretty boy! (Laughs). 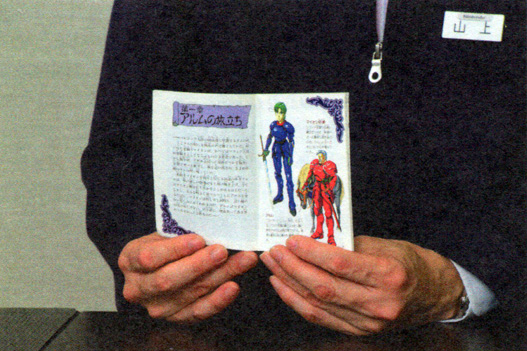 Kusakihara: If you compare how characters looked in Gaiden’s manual with the game itself, you can see there were already great differences with the pixel art versus manual art. So we also had to have a lot of discussions regarding which of these two to base the designs after.

Q: Everyone really did become a lot prettier. Sometimes I find myself gazing at the bottom screen even during a battle.

Higuchi: Speaking of that bottom screen, both Mr. Nakanishi and Mr. Yokota made it very clear they wanted face portraits there.

Nakanishi: Because it was just too cool to let go to waste. I even wanted them on the top screen!

Kusakihara: The truth is, there was actually talk of doing this with Fates too. But we couldn’t implement it in that because the screen was already cluttered with all the detailed information we needed to show.

Q: All the characters will probably become more popular than before, huh?

Nakanishi: Well, in the original work there were a lot of characters that were hard to gauge in terms of personality. A lot of them would not even speak after one or two conversations. This time they all have individuality, as well as voices, so one will be to get a better insight of their character this way.