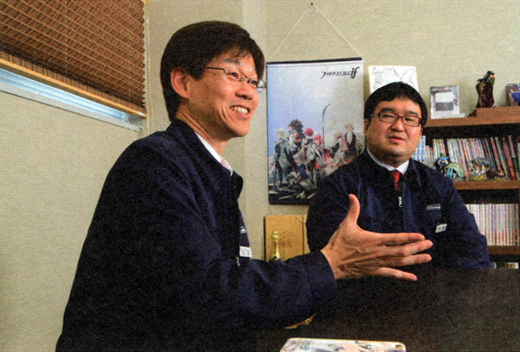 Unlike the other games of the series, this one is the most RPG-like

Q: With Gaiden as a base, you added quite a few new features. Please tell us more about that.

Kusakihara: First of all, Echoes is, at its core, RPG-like. There is no avatar this time, and instead you play as Alm or Celica. We hope players will have an increased sense of empathy with them when they see the world from their point of view. We also added options to explore villages to get a better sense of life within them, as well as being able to speak with villagers, inspect areas, and talk to allies in first person (as the main character). Upon entering dungeons as Alm or Celica, we wanted players to feel what they feel, and aimed to make it like the player experiences the five senses as they would as if they were there. It was a central aim of this production.

Q: And as for the skills?

Kusakihara: Skills are just one component of an RPG. The sort of thing you take into consideration when equipping the unit with along with items. We prepared some skills special to this game, so please take a look at how they look within the battle animation itself. Of particular note are Alm and Celica’s special moves, as well as the Triangle Attack.

Q: On the topic of battle animations, please share some thoughts on them this time around.

Kusakihara: I was once again in charge of the same staff that oversaw the battle animations in Fates, so we all implemented things we didn’t get to implement in Fates. We elaborated on the counterattack animation, for example.

Nakanishi: Things like slow motion, sword movements, or dodging to the side. Other things like arrows actually hitting their target when fired from a distance, too.

Kusakihara: Some other things may be harder to notice on the surface. For instance, climbing stairways in the dungeon, the feet actually connect to the steps at the proper height and such. Before this, we often took shortcuts and dodged all the minor details, but this time, we paid attention to all of that.

Q: Speaking of “connecting,” what were your intentions with wireless communication features this time around?

Kusakihara: Since Echoes will be coming out around the world at roughly the same time, we decided to go forward with the implementation of an online ranking/comparison system. It can lead to fun experiences that haven’t happened before, such as: “Wow, this person has a lot of medals!” or “I wonder how I stack up?”

Higuchi: In addition, there is a StreetPass function where other players bring along rumors, which, if followed, leads to treasure.

Q: Is there any amiibo communication?

Kusakihara: Yes, but very few uses. You can transfer only Alm or Celica’s data onto them, and let other players borrow it. For example, imagine a child who gets stuck facing an incredibly hard enemy. His father decides to help him by lending him his stronger characters. The idea was a way to allow family to play together like that –as we live in an age where we [the adults] may have played the original Gaiden.

Q: When you think about that with the memories Mr. Nakanishi recounted earlier, you can’t help but feel warm and fuzzy inside.

Kusakihara: There is one other function [for amiibo] involving dungeon exploration. For Alm, there is the “War God’s Trial” which involves challenging five powerful boss characters. You receive items upon your victory. You can retreat if you can’t defeat them, so it’s a nice indicator of how far one has progressed in the game.

Higuchi: Maeda* served as director from New Mystery of the Emblem through Fates, but this time Kusakihara has that role instead. He recognized the better points of Gaiden and brought those the RPG-esque feeling to the forefront combined with the new style of Fire Emblem games for us. Aside from what we mentioned already, there are also other fun things such as characters and meal preferences, as well as seeing if some quests in some villages have been fulfilled when you return to them. This game is packed full of things like this, never before seen in this series. One gets the sense that people actually live in the continent of Valentia, and we were happy to deliver an experience that breathes life into the setting.

*Mr. Kouhei Maeda. Works for Intelligent Systems. Has been a developer since Binding Blade, and served as director on New Mystery of the Emblem, Awakening, and Fates. He is currently the director for Heroes.

Kusakihara: I was so particular about ensuring that would be the case –to the point release got delayed. Sorry about that. The new Nintendo console even came out before it. But, now it is even more like the original Gaiden! (Forced smile).

Nakanishi: Indeed, as Gaiden was released after the Super Famicom had already come out! (Laughs).

Building upon the Valentia we saw in the original Gaiden

Q: With the remake, the story has been expanded upon significantly. Please share some highlights of it with us.

Kusakihara: Gaiden’s central theme was always about a confrontation between the opposites, such as “strength/love” and “men/women.” Alm pursues a path to power, Celica stands on the side of love.

Nakanishi: Duma and Mila are the very representations of power and love. This battle isn’t really portrayed in the original Gaiden’s story, though. All of that was written in the manual instead. If one didn’t read the manual, they would be rather confused why they suddenly switched to a different character in chapter two of the game for seemingly no reason. We wanted to make this story known to all players of the game, so many scenes were added for this purpose. We added voices and an entire prologue that shows the two in childhood and their relationship, for instance.

Q: Characters like Saber in Celica’s army appear a lot more often than before, too, it seems.

Kusakihara: When expanding upon a story, an inevitability we face is that without a narrator, we can only do so much to widen the scope of the tale. So Saber is in place in Celica’s army, and even if he is lost in battle, can still tell his story, for instance.

Nakanishi: It is not exclusive to Saber, either. There are always a few characters that must be there for the story to continue among the many others [who can die].

Kusakihara: It is necessary for consistency, and so may differ from the original work in a few places as a result. For example, well, I don’t want to give away too much, but wanted to incorporate new characters that show “what happens if one only has power?”

Q: Speaking of new characters, please tell us what the idea behind adding the new character Faye into the story as one of your initial allies.

Kusakihara: Well, the main reason is simply that Alm’s army was all men otherwise. I also wanted to add some uncertainty to otherwise predictable elements. In this case, she is a loving childhood friend with Alm, even though Alm himself shares his special (and mutual) connection to Celica. We want players to enjoy learning more about what kind of girl she is.

Nakanishi: She’s also there to give players who have already played Gaiden something new to look forward to.

Q: Things like the lower screen are obvious, but the fine tuning of the world setting as depicted is all unique to the remake, right?

Kusakihara: Yes. Gaiden had its setting and history written in the manual. But this time we wanted to depict what kind of events could lead to the current friction between two countries. We put a lot of thought into placement of forts, buildings, and backgrounds in order to fill in the gaps that existed in Valentia’s history.

Q: The characters feature full voice acting during events too. Was this decided on from the start?

Higuchi: Yes, we had decided on that from the very beginning. There are a lot of dialogue scenes with the character portraits, which alone would not really convey emotions and tones properly. To truly convey tense moments, happy moments, or those that can fluctuate in emotion suddenly, we felt that voices were absolutely necessary.