Q: Though not directly related to Echoes’ contents, how do you feel about Fire Emblem’s constantly expanding popularity?

Yamagami: As we said in an interview with the company president about Awakening*, though the Fire Emblem series was known by many, its sales were subpar up until then. We needed to sell more games, and often overthought how to go about doing it. Mr. Higuchi and I also constantly had opposing viewpoints on how to go about doing this, too.

* Iwata Asks, a developer interview with the late president of Nintendo.

Yamagami: I felt I had to make it more interesting to potential customers even if it meant changing things up significantly if need be. But Mr. Higuchi did not want to change it too much out of fear of losing what makes Fire Emblem what it is, and was protective of it that way. Our opinions were at complete odds with each other, not much could be done, really. I was still young at the time, so had little influence and was bad at wording my arguments. So I made a proposal in hopes of compromise. From that, New Mystery of the Emblem gained a casual mode where no units die. It was well received –and yet the sales did not improve.

So, at the beginning of Awakening’s development, we were warned by the parent company: “Look, if the sales continue to be subpar, then this is your final game.” Hearing that, the development team went, “Well, since this is probably the end, we can just do whatever the heck we want. Let’s throw something together with no regrets!” Everyone threw out various ideas and ways they could be implemented. Yokota and Maeda especially emphasized wanting to depict characters with their own unique traits and individuality. To that end, they brought in Mr. Yusuke Kozaki* as they felt his style was a match for Awakening and a way to bring it to a greater audience.

*Mr. Yusuke Kozaki. Illustrator. Has contributed various illustrations to the series since Awakening.

Nakanishi: That game ended up selling over one million copies overseas.

Yamagami: I wasn’t even thinking of the overseas audience at the time, so was quite surprised by those results. Anyway, the company then came around simply asking: “When’s the next one?” (Laughs). The exchange that followed went something like: “Didn’t you say this is our last one?!” “Well it sold, so that’s how it is.” Even though it was a rather silly argument, deep down I just felt a great sense of relief.

Q: And so along came Fates. 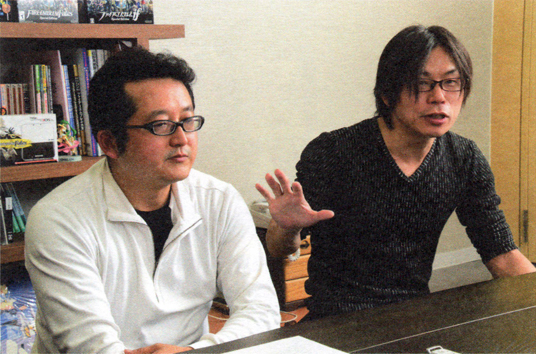 Yamagami: As a follow up, we decided it should have even more characters. So we implemented something I wanted to do for a long time: “Depending on the characters you choose, the story changes. Two versions!” It was a plan we stuck with through release.

We gained many new players this way, and have taken on the company’s challenge of venturing into smart phone gaming as well as card games. From my point of view, the harsh times lasted way too long, and so, I intend to make the most out of this recent comeback. Of course, we’ll always be thinking of new ways to appeal to the customer base and acting upon it decisively. That is the most important thing for us.

Higuchi: We are incredibly thankful that more people took notice of this series through these methods. We have dropped the notion of “A Fire Emblem game must be like this” when approaching new titles, which allows people to always experience something new. It is also a challenge to inevitably face every time it comes to picking up an older title. With a card game and smart phone title, Fire Emblem no longer has just one way to play.

Q: What are your thoughts, Mr. Nakanishi?

Nakanishi: I have the privilege of being the director (for better or worse) for FE 0 (Cipher), and am glad to see Fire Emblem fans able to better interact thanks to Cipher and Heroes. I feel that these titles have increased the size of the fan base in general, too. Echoes is not just a title for these new fans, though, but also a work we put our heart into for fans who love Fire Emblem and have supported us through the years. We feel that it can be a game that brings old and new fans together to mutually enjoy.

Yamagami: For this work, we dug deep into the original during development and were like: “Wow, the game was like this?” With Gaiden as a base, we expanded on the game’s dark story with the technology we used for Awakening and Fates. It essentially became a whole new game.

Q: And your thoughts, Mr. Kusakihara?

Kusakihara: If it comes to just releasing title after title, I would aim to make every title fresh in some way to avoid the series becoming stale. It is only after Awakening that I really started thinking this way, though…

Yamagami: Huh? But what about that?

Kusakihara: Oh? Is it okay to talk about it? Well, the truth is, there was a game we had planned for the Wii after Radiant Dawn, and started development on.

*TN: Likely the same game I translated developer documents for from the 25th Anniversary book. See that here.

Yamagami: It had me as the producer, and Mr. Kusakihara as the director. It was going to be a real time strategy Fire Emblem game with all sorts of interesting departures from the norm. But, as we approached a finished product, the incredibly picky Mr. Kusahara was not content with it as it didn’t fit the image he had in mind when he played it. While it was incredibly amusing watching him try the product, I don’t think I could’ve reached such a decision so quickly based on that alone. It did show just how passionate he was about the real time system though, but, in my experience, Fire Emblem was always about minimizing casualties as much as possible and thinking about things carefully by the turn. To put together a real time experience in a short time without these considerations and make a judgement based on that was a little premature in my opinion. So, in the end, development froze.

Kusakihara: Real time really is tough… (Smiles bitterly). But, we came up with the tech seen in Awakening at that time. Things like the 3D motions and sequences.

Yamagami: Incidentally, that was the 13th work. I was not aware of it time, but that’s a rather ominous number huh?

Kusakihara: It just reminds me that I have to work harder [to achieve my goals], really. I am proud and quite happy with the extremely positive response Echoes is getting, though. Also, since various teams are shifting around with some mismatches that are inevitable, I hope to form strong connections [that will let us avoid issues].

Yamagami: A few final words… “Buy these games without worries!” Does that work? (Laughs). We have already begun development on a new title for the Switch, and so I think this is probably the last Fire Emblem game on the 3DS. There’s still a bit of time before I can share news for the Switch title, so please enjoy Echoes –a culmination of all the 3DS Fire Emblem games –until then. I want to be ready to talk about the Switch game by the time the customers can safely respond with, “But I’ve already played the game [Echoes]…”

Thank you all for continuing to support the Fire Emblem series in the future!