With the Wii remote, you can play with just one hand

─When you decided to make the game for the Wii, did you think people would want control features unique to the Wii?

Yamagami: From the beginning, we had a clear opinion concerning this. Even if a game is made for the Wii, it doesn’t mean that it has to feature motion controls. It’s good for a console to have different types of games. The Wii itself was sure to have players who enjoy traditional games, and the people who had played previous Fire Emblem games would surely not be the type to enjoy flailing around with the Wii Remote.

Therefore we thought it would be best to include Classic Controller support. However, because it wouldn’t be easy to just package every game with a Classic Controller, we decided in the very beginning of the game’s development that the game should also be playable with the Wii Remote.

─By the way, which controller would you recommend?

But because we don’t want to demand customers to pay extra, you can also play the game with the Wii Remote, in a horizontal position, for example. We made sure to make that setup as comfortable as possible. 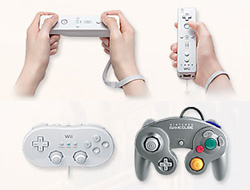 Radiant Dawn can be played with three different controllers.

Narihiro: This is really a side note, but with the remote, you can play with only one hand as well. (laughs)

Yamagami: This means you can play the game while eating sweets. This can obviously be a very time consuming game, so relaxing like this is the ideal way to enjoy it.

Tawara: By the final stage, the fans of ‘one hand controls’ had increased considerably among the debug team too. With this control setup they could write notes with their free hand.

─Ah, it’s a good thing I asked. I’ll have to let the guys who are writing the player’s guide know about this! (laughs)

Yamagami: In that sense, I guess it was great that the game got a ‘Wii-like’ control method after all.

The four-part structure gives the game a good rhythm

─Around how many people were developing the game this time?

Yamagami: If we include the people who did the FMVs, it’s a lot of people.

Narihiro: If we include them, it’s around 200 people in total. About that many people, I think. All of the people who were involved aren’t in the end credits. In broad terms, there were around a 100 people doing the game and a hundred doing the FMVs.

─Weren’t there around 110 people involved in the development of Path of Radiance?

Narihiro: Anyway, you can’t say that we skimped in terms of the amount of sheer content in this game.

─In that sense too, it is an epic game.

Yamagami: Of course, it is a big game, but at the same time, it’s not a game that’s hard to get into.

Narihiro: In the beginning, we were talking about basing the game on a three-part structure. But it wasn’t like we just wanted to make a game that had a lot of stuff in it. One of the big challenges we wanted to take on with this game, was to portray a grand world, in a form as compact and easily enjoyable as possible.

We wanted the players to delve as deep as possible into the drama that unfolds throughout the continent, but on the other hand, if you give the player too much information, it can get hard to understand. Finding a balance between these two extremes was pretty hard.

─About how many hours will the game take to complete? 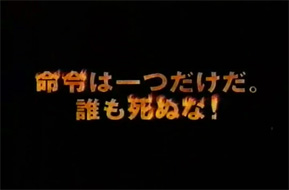 A ‘Perfect Play’ is completing the game without losing a single character or missing a single item.
(This picture is taken from the commercial for Path of Radiance.)

Narihiro: While it may take a while to do a ‘perfect run,’ if you are okay with a few of your units dying, you may be able to finish this one quicker than Path of Radiance. Now that the maps are in 3D, you might feel that they are larger, but if you compare them block-by-block with the originals, they are not that big. Because of that too, even if you finish the game once, you may still want to challenge yourself and play through it again.

Yamagami: There are loads of maps in this one. I think that’s why some people may wonder if there’s a bit too much for them. Avoiding a situation where the player feels overwhelmed is another reason why we chose to divide the game into four parts. The first three parts each have their own, proper conclusions, and in the final part, all of the three stories converge. After each part, you can take a breather, and because each can be passed in only ten-or-so hours, you shouldn’t have a problem following each story arc until the end.

While the game certainly has the feeling of a blockbuster, when you actually sit down and play it, I think you’ll find that it still moves at a good, entertaining pace. You can recommend it without reservation even to people who might think that ‘it looks like there is so much to it. I wonder if it’s too much for me.’ Even if you are the kind of person who prefers lighter games, while the story of the game is long, it can still be enjoyed casually.

Furthermore, if you choose to play on the ‘normal’ difficulty, even if you make some mistakes, you won’t die that easily and you should be able to make progress at a decent speed. That’s why, even if you haven’t played a strategy RPG before, we hope that you will give this game a try.

─This is the first time you have tried a four-part structure, isn’t it?

Yamagami: Yes. When it comes to these kinds of games, in the beginning, the player is learning the game system, so progress will be unavoidably slow. But as the story progresses, you really get into it, and by the time you are in part three, it feels like it’s going so fast! (laughs)

I think with the structure of this game, there are parts that really draw you in and really make you want to know what happens next. Though, as I’m someone from the development team, I guess I shouldn’t be praising it myself! (laughs)

Hard mode has more dialogue scenes for you to enjoy

─Are there any differences in the scenario between the Normal and Hard modes? 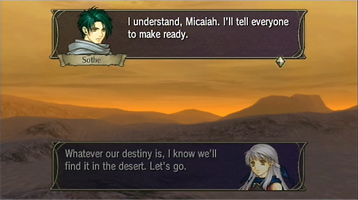 Dialogue scenes appear before, during and after each battle. Through them, various characters are interwoven into the story.

Maeda: It’s not that they are different. Perhaps Fire Emblem enthusiasts would enjoy a long and deep scenario, but for more casual gamers this can make it harder to get into the game. On the other hand, fans of the series may feel unsatisfied with a lighter and shorter story. Therefore, we’ve modified the dialogue scenes to be a bit longer for the Hard Mode and a bit shorter on Normal.

Editor’s note 2: The dialogue differences are only present in the Japanese version of the game. In the Western releases, all three modes have the same dialogue, taken from the slightly shorter Japanese Normal Mode.

Tawara: Just so there’s no misunderstanding, the number of maps is still the same in Normal Mode.

Yamagami: The maps, the characters and the story are all the same.

Tawara: Although, of course to change the difficulty level, the number of enemies that appear in each map is different. The amount of dialogue between the modes has been changed in the same way. On Normal the dialogue scenes are put together more compactly. If there are about, let’s say, a 100 dialogue scenes on the Hard Mode, on Normal, it’s about 50-60% of that.

Editor’s note 3: Tawara’s estimate is perhaps a bit of an exaggeration. From translating the Japanese Hard mode dialogue, I’d say 80-90% is a more conservative estimate.

Yamagami: Other than the dialogue scenes, which are integral to advancing the plot, there are also other scenes that, for example, reveal the kind of connection two characters have with each other. While these kind of scenes may be highly enjoyable for the Fire Emblem enthusiasts, for new players they might seem completely unnecessary, having no effect on how much they will enjoy the game.

In other words, by taking out the scenes concentrating on character building, we hope that players new to the series will be able enjoy the game more by just concentrating on the main story. We’ve heard from the more casual players that the storyline was too hard to follow in our previous games, so we’ve thought out this new structure and have found it to be the best solution to this problem.

We hope that each player will enjoy the game on the mode that suits them the best. If a player tries the Normal Mode, and finds the strategy aspect of the game to be lacking a bit, they can just try the game again on Hard. And should you find Hard Mode to be a bit too much for you, because the core story is the same, you can play on Normal Mode just as well.

Even if a character dies, we hope that you will keep going

─In a previous interview concerning Path of Radiance, there was talk about how Normal was actually equal to an Easy Mode, and Hard was actually Normal. But upon playing this game, it seems that Normal is actually pretty tough.

Narihiro: Actually, in this game too, the Normal Mode is equal to an Easy Mode. 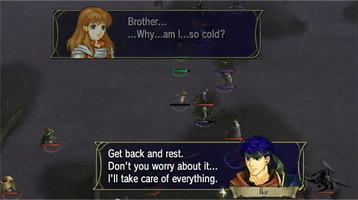 When a character reaches 0 HP, they will typically be forced to leave the game forever.

Yamagami: I think that from the point of view of a more casual player, the Normal Mode is ‘Normal’ in difficulty. Even when I try out the Normal Mode, I still end up losing several of my characters. (laughs) However, even though you’ve lost all those characters, because the story is so interesting, you still want to keep on going to see what happens next. Obviously, if you manage to kill off your main character, you’ll get the Game Over screen, but as long as you manage to keep him/her alive, you can continue forward.

Of course, trying to keep everyone alive is one way to enjoy the game, but if you play the game on Normal, you can enjoy the game casually, making steady progress. Even if one of your characters ‘bites the dust’ it won’t be an obstacle to your progress. When someone playing a Fire Emblem game for the first time experiences their first character loss, that person may think ‘Wow, this game is really hard.’ I don’t think this is good. I don’t want Fire Emblem to be the kind of game in which you feel you have to restart every time you lose someone.

That is one of the reasons why the difficulty is set to a relatively easy level on Normal. Still, if you lose a lot of characters, the game will get pretty difficult towards the end. Therefore, whenever you lose a character, you should concentrate on making your remaining units stronger. We hope that the players will enjoy using this kind of strategy.

─In addition to Normal and Hard, there is also Maniac Mode.

Narihiro: That mode is only for people who’ve managed to beat Hard Mode. (laughs)

Yamagami: Quite fittingly, it is a pretty arduous challenge. (laughs)