The meaning behind the subtitle

─Was Goddess of Dawn (Radiant Dawn’s subtitle in Japan) the game’s subtitle from the very beginning?

Narihiro: While the story is also entwined around the existence of the titular ‘Goddess of Dawn,’ with this game we wanted to portray the conflict, or struggle, which is inherent in all people, as a sort of instinct, through the antagonism between the Beorc and the Laguz. The continent of Tellius, the world of this game, was created by the goddess and with the previous game we told the first half of the story of this continent. With this game, we wanted to explore how and why this world became what it was, so it felt appropriate using ‘goddess’ as a keyword in the subtitle. 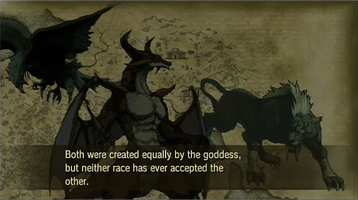 On the continent of Tellius, there exists a conflict between Laguz (shapeshifters) and Beorc (humans). This conflict is the major theme of Radiant Dawn.

─So there was no intention to create any connection to The Legend of Zelda: Twilight Princess? Dawn is a sort of opposite to twilight… (laughs)

Narihiro: Now that you mention it…

Yamagami: I never noticed that! (laughs)

─Also, Path of Radiance (known as Trail of the Blue Flames in Japan) has the image of blue, while with Goddess of Dawn we have red (the beginning of ‘akatsuki’ Japanese for dawn, ‘aka’ sounds similar to red)…

Maeda: (Looking a bit embarrassed) Well, now that you mention it, when we were throwing around ideas for the subtitle, certainly, there was talk along the lines of ‘since the previous title had blue, this one should have red.’

The language is a bit ‘rougher’ in Radiant Dawn

Narihiro: No, that is not the case at all. The conclusion to Radiance was already seen in that game. We made sure that you could follow the story perfectly, even if you started playing with Radiant Dawn.

Tawara: While the world is the same, there are no parts that can’t be understood without having played Radiance beforehand.

Narihiro: From the very beginning of the series, it has always been our intent to make sure to leave space for the imagination of the player. Although, back then, with the limitations we faced with the original Famicom, this was really the only way we could go about it. (laughs) The tradition of the series is to challenge ourselves to avoid providing the players with plain and definitive answers to everything. 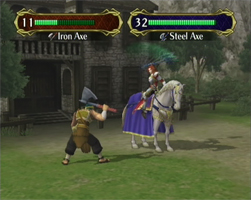 The previous game, Path of Radiance, was released in 2005. Since you can play GameCube software on the Wii as well, if you haven’t played it yet, please give it a try!

─Maeda-san, when you were writing the scenario for this game, was there any aspect to which you paid particular attention?

Maeda: I paid special attention to portraying the personal backgrounds of the various characters, many of whom had already made their appearance in Radiance. Some of them had returned to their farms after the events of Radiance, and were doing field work etc. I wanted to show what kind of life each of them had been living up until the events of this game, and in what manner they get involved in the conflict this time. And allies from the previous game turn into enemies during the events of this one, and vice versa. Also, the language the characters use may have become a bit more intense compared to previous entries in the series.

Yamagami: Previously, some may have felt that ‘they’re at war, and they’re still talking to each other in such a soft manner? Really?’ (laughs) In tense circumstances, it’s natural that the way people speak to each other would become rougher as well. While we have strived to make the expressions more realistic in this area, please be assured that it was not just to make the story more coarse or vulgar.

1.5 times as many characters as in the previous game

─By the way, do most of the characters from Radiance return for this game?

Higuchi: Let’s leave that to the players to find out. (laughs)

─So, if we change the question a bit, about how many characters appear in this game?

Higuchi: Even if you only count the characters who become your allies, there are quite a few of them. When it comes to the total number of characters, it’s about 1.5 times as many as in Radiance. And we’ve made sure that none of the characters are a waste, so each and every player is bound to find characters that they’d like to use.

Yamagami: Although, with all these characters, pretty soon we’re going to run out of names we can use for them. (laughs)

─So, how do you come up with the names for the characters?

Narihiro: Our staff just comes up with a lot of them… First, we write a draft of the storyline, and then check that there are no two characters with the same name or, for example, that there aren’t too many names starting with the letter ‘A.’ The most important thing is to choose names that are easy to recognise. 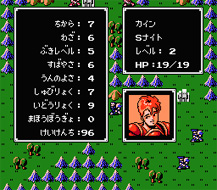 Ankokuryuu to Hikari no Tsurugi on the original Famicom. Here, Cain’s name is spelled with only three characters.

─Almost all of their names are written with only six or fewer characters, am I right?

Narihiro: I guess we could consider changing that rule soon. It seems that the very harsh character limit of the original Famicom is still living with us. (laughs).

Narihiro: Back when we were developing for the very restricted original Famicom hardware, we had to consider little things like how we could shave off even one character from the text. And because the text display area was so cramped as well, we had no choice but to choose as short names as possible. With today’s powerful hardware, we really don’t have to deal with such restrictions anymore.

Higuchi: However, since it’s a series that has been going ever since the Famicom, there are other traditions too. For example, like how in Mystery of the Emblem (1993) you had a red and green character, Cain and Abel, with red signifying ‘power.’ These kinds of traditions have carried on unbroken to this latest game as well. (laughs) I think that these kinds of elements are very easy to read for people who have experience with the series.

Yamagami: Although, if I may note to the beginners, you can still perfectly understand the game without any earlier experience. Please don’t worry about that.

Editor’s note: This feature is known as the ‘Character tree’ in the English version.

─So, continuing on, it’s really enjoyable how the Character Relationship Chart gets filled in, isn’t it?

Narihiro: Even I, somebody who has been involved with the development of the series from the very beginning, often lose track of who’s who in the game. (laughs)

Narihiro: Among people who like these sort of ‘simulation games’ there are people who aren’t concerned with characters at all. My own playstyle tends to be very lop-sided too: I tend to use my favourite characters thoroughly until the end, but with other characters, at times I can be like ‘there was a character like this in the game?’ Even when I’ve made someone my ally, later, I might think ‘Now, where have I met him before?’ Well, this really only happens once in a while though. (laughs)

While this doesn’t happen that much anymore, it used to be common for character features or names to change during mid-development. That’s why, it was not unusual for us to get confused about who was who. Therefore, because we thought it would be nice if the player could see details such as which country each character was born in, we decided to include the Character Relationship Chart. 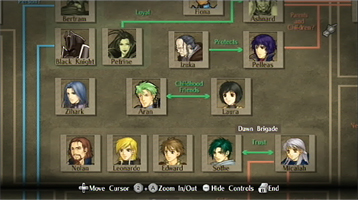 The very handy Character Relationship Chart. If you can’t quite remember the names and the relationships of all the characters, with this you’re sorted!

Tawara: If even Narihiro-san was having such difficulties, including it was a good thing. (laughs) Of course casual players are even more likely to have difficulties following everything, so in that sense too, I think it was a good idea.

─In terms of gameplay evolution, now with the 3D maps, you have the difference in altitude as well. Does that mean your accuracy improves if you are on higher ground?

Narihiro: Yes, it is advantageous to be on higher ground.

Yamagami: On stages where you are protecting your fortress, there is a new way to play the game. If you have a character that is not so strong yet, you should give them a projectile weapon, and position them on higher ground. Because your enemies on lower ground can’t hit you, these characters can now function as ‘tanks.’ Though when you first see these maps, where a multitude of enemies shuffle towards you from below, you wonder how on earth you can fight all of them? (laughs) But by using this difference in altitude and the projectile weapons to your advantage, you can defeat the enemies one after another.