Maeda: Concerning Micaiah, this is treading into spoiler territory, but there is something about her that ties into the game’s story in a big way.

Higuchi: As a main character, Micaiah is clearly distinct from the series tradition. When we designed her, though she has a sense of mystique and charisma about her, we aimed to portray her human weakness and kindness while avoiding making her design overly flashy. 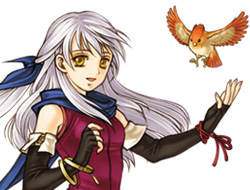 Micaiah, also known as the silver-haired maiden or Priestess of Dawn, is the main character for the first part of the game.

Narihiro: The very last part of the story in Radiant Dawn is extremely good. Though I won’t tell you anything about it now… (laughs)

Yamagami: The scenario for this game is very good as well! I was mesmerised during a scene where a certain someone makes their appearance.

─Also, in Radiant Dawn, the characters move a lot smoother now, don’t they? In the previous game the animation was a bit more wobbly…

Yamagami: That was a surprise, wasn’t it? (laughs) When I first saw it too, I couldn’t help but admire it: ‘The animation sure is smooth now.’

Narihiro: We made this new game paying great attention to detail, even up to small details that I’m not sure the users will notice. If there remained some problems that we couldn’t handle in Path of Radiance, I think we did a considerably good job of clearing them out with this game.

─In an interview for Path of Radiance, If I’m not mistaken, I recall you saying that you felt it was only 70% finished?

Narihiro: I said such a thing? (laughs)

Yamagami: Back when we finished Path of Radiance, Narihiro-san did say that he had some regrets. Of course, since that was our first time making a full-blown 3D game, there were some parts where we didn’t feel quite satisfied and felt like we could have done more. However, precisely because we had reflected on the flaws of Radiance, when the development of the Wii title began, we became really confident that we could do better this time. 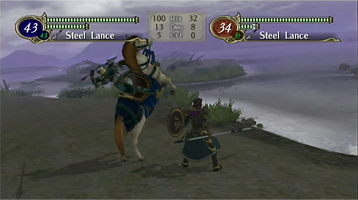 Yamagami: Because this title evolved a lot during development, we really felt like we could have continued working on it a lot longer.

Tawara: Like with the last game, we asked Digital Frontier to do the cutscenes for us.

Narihiro: We began work on the game with the approach that it wouldn’t be good if we couldn’t do something that was clearly beyond what was in the previous game. This went for the cutscenes as well: Digital Frontier approached the cutscenes with a new theme in mind and strived to do the best work possible.

Tawara: With Path of Radiance, after we gave Digital Frontier a look at the actual game, it was decided that it was ‘a game that brought the characters to the forefront’ and the cutscenes were made with this in mind as well. Of course that was a good fit for that game, but on the other hand, perhaps there were too many cutscenes which focused on the characters. With this game, we made the cutscenes intending to make something more adult-like, or rather, with the intent of pushing the world of Fire Emblem to the forefront.

Yamagami: Anyway, in the cutscenes, we wanted to express the world of Radiant Dawn, and the rivalry and antagonism between its two great powers. The new cut scenes were produced with a lot more contact between us. I think there are very cinematically fresh scenes in the game, like, for example, one where a massive number of soldiers are all crowded together. When I first saw that, I got goosebumps.

─With the last work, the feel was more like that of an anime, but with this, it feels more like Taiga Dorama.

Tawara: A considerable number of soldiers are shown moving together using CGI. Also, all of them have been animated using motion capture, so they give you a very realistic impression. When that cutscene was made, we used quite advanced technology. It seemed like it was the first time experimenting with this kind of technology for Digital Frontier as well. 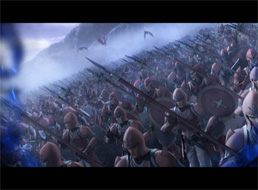 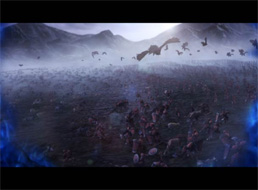 The awe-inspiring opening movie, which you can see as many times you want on the title screen. It’s a must-see! (For people who haven’t seen it before, check it out at the game’s homepage!)

Higuchi: Though at the same time, it seems that there were around 100 or 150 animation motions assigned to each model, so the animations were a pain to implement as well. (laughs)

Yamagami: Considering how the movies came out even better than we could have imagined, I am very happy that we asked Digital Frontier to do them for this game as well.

The appeal of Fire Emblem according to the developers

─So finally, I’d like to ask everyone here, where do you feel the appeal of the series lies in?

Tawara: As Yamagami-san said earlier, Fire Emblem is not a mere simulation game, or a game based on symbols and codes. I think the human nature of the characters is portrayed very well throughout the series. Therefore I think the appeal lies in how well the story and gameplay are united.

Furthermore, normally when you play these games, when one of your characters dies, you can’t just revive them like you would in other RPGs. You may even have a moment of introspection like ‘Ah… looks like I’ve managed to kill him off. What have I done now.’ In this way, I think the interesting thing about the series is how you can, at times, be moved while playing the game.

Higuchi: For everyone who has been worked on the titles throughout the series, our root aim has been to cultivate extremely responsive grid-based gameplay. Now, I’m in charge of the graphics, but even I’ve had to make some tearful sacrifices, because maximum preference has been placed on user-friendliness. I think that’s why, because responsiveness has been our number one priority all this time, it must be the foundation for the appeal of Fire Emblem.

Maeda: I think the charming part of the games is the way you can become emotionally invested in your characters while you train them. Even though they may be weak in the beginning, if you train them carefully, they are sure to become reliable fighters eventually. If you just expend affection on your characters, it is sure to be reflected in their development, which is a satisfying part of the games.

Narihiro: I think Fire Emblem is something like Slow Food. For example, there are people who are no good at action games. For them, I think that Fire Emblem is a ‘Slow Game,’ something that they can play slowly and deliberately at their own pace. And there’s the story too. I think getting involved in the narrative, and playing through it slowly is what’s appealing about Fire Emblem.

Also, perhaps because we are of the generation that grew up with Gundam, the overarching theme of the series is how there are also righteous enemies, and portraying how the world isn’t simply as black and white as you might think. I think the fact that the series has retained its appeal after all these years is because of this kind of world view that it has. 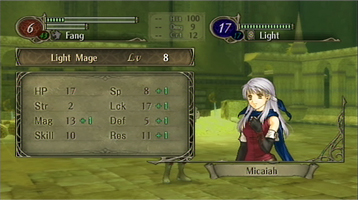 As the game progresses, your characters will change and grow. Maybe one day, they’ll become a legendary warrior.

Yamagami: Even though Fire Emblem is a game you play by yourself, there is a feeling of fellowship in these games. I think that there aren’t too many games that can convey this kind of feeling to you. I believe the reason why the games can evoke this kind of emotion in you is because you can feel how all of the characters really are your comrades in arms.

And then, if you can achieve your objectives with this band of characters, you feel like you are rejoicing with them. And even if you lose a character in the game, you will take with you their life before they died and the connection you and the other characters had with them, and carry them until the end of the game. In this way you can even feel like you are sharing the sorrow of losing your comrades. So, even though you are playing a single player game, it’s as if you are achieving your goals through group work with your friends. It’s a really rich experience.

Moreover, as Maeda-san said just now, you can experience the narratives of the games at your own pace, with the characters of your own choice. This is not merely like watching a fantasy film. Instead you are deeply involved with the events, sharing your joys and sorrows with your comrades and tasting a real sense of achievement. I think this is the strength of the series.

─Thank you for the interview!

You can leave a message on the forums.

If you wish to contact the translator, Sami R, or leave a message privately, please send a PM to VincentASM on the forums or send an e-mail, with the subject “FE Interview”, to: [email protected]