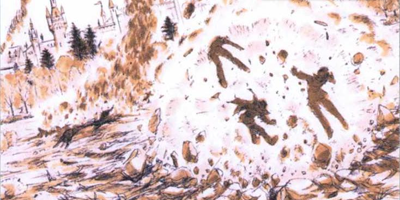 Image from the Illustrated Works

The Battle of Barhara is the last event of Chapter 5 in Genealogy of the Holy War and the ending of Sigurd’s tale. Alvis plans the battle as one of the last steps towards uniting the continent with him as emperor. It is one of only two events in the series that show the death of a lord.

When Sigurd confronts General Aida in Velthomer after his army defeats Leptor, Aida greets Sigurd as though he were an innocent man. Aida tells him that his army is expected by the king, Alvis, and the Royal Guard for a ceremony near Barhara. When Sigurd approaches Barhara with his troops and meets the Royal Guard, he has a chat with Alvis. After a short conversation about the king, Alvis reveals that Sigurd is in fact still considered a traitor and sentenced to death. Alvis flaunts Diadora for a moment and then kills Sigurd. Sigurd’s troops find themselves trapped by the surrounding soldiers and are bombarded by the meteor spell.

It is unknown whether most of the playable characters from the first generation were killed or not, but some characters who definitely survived the battle are Fury, Tiltyu, Lachesis, Adean, Sylvia, Levin and Briggid. The people who managed to escape the battle, as well as those who died, were branded as traitors to the kingdom. The only living character at that point in time who had been playable yet who wasn’t present was Fin.