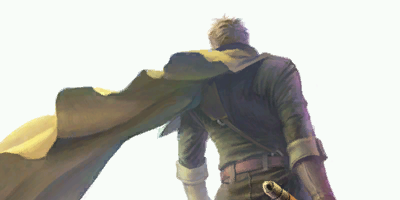 To Ike, Mist and the Greil’s Mercenaries he was a father, tactician and warrior of incredible strength. To certain circles inside Daein and Begnion, he was General Gawain, the Divine Knight and one of the Four Riders of Daein.

Originally, Greil was a citizen of Daein. He worked his way up the ranks of the Daein Army where he became General Gawain, one of the Four Riders of Daein. The Four Riders were the most powerful soldiers in Daein and the royal family’s most trusted vassals. It’s not known when but it’s most likely while in Daein he met and married Elena, Ike and Mist’s mother.

Sometime after the Serenes Massacre, Elena was asked by King Ashnard to help a Heron princess he had captive. Elena and the princess came to trust each other to the point where the princess entrusted Lehran’s medallion to Elena. Shortly after, the princess died. Realizing the danger they were in, Elena and Gawain fled Daein. The two moved to Gallia and it is around this time Gawain changed his name to Greil. Ike and Mist were born to them and Greil began to look for work in the Crimea.

Alas, this young family would not stay content for long. Perhaps taken by curiosity, Greil picked up the Medallion they took from Daein. The moment he held it, his mind was shattered. Taking up his sword in his other hand, he cut down everyone in town. A group of trained soldiers from Daein came to subdue him and take back the medallion by force. He killed them all with ease. Elena finally took it from his hands at the cost of her life.

When the ex-general regained his senses he was horrified at the atrocity he committed. To prevent a second tragedy, he slashed the tendons of his sword arm and hired Volke to kill him if he should ever go mad under the medallion’s influence again. He moved to Crimea with his family where he created the mercenary guild Greil’s Mercenaries. Because he could not wield a sword he chose Urvan, a powerful axe as his new weapon.

Shortly after Crimea fell during the Mad King’s War, fate saw it fit that then Princess Elincia would hire the Greil’s Mercenaries to escort her to Gallia’s King Caingehis. With Daein hot on their heels, Greil leads the guild and their client into Gallia, where Daein’s army would dare not follow. To increase the guild’s chances of safely delivering their client Greil orders Ike to escort the princess further into Gallia while he, Gatrie and Shinon diverts the Daein soldiers away from them. It’s during this time Greil chances on Mia, frees her from captivity and hires her.

After getting Elincia to safety, Ike and the rest of the guild catch up to their leader inside an abandoned castle. They enter to find Greil holding his own against General Petrine, one of Daein’s Four Riders. Realizing she cannot overcome the legendary ex-general’s brute strength, she orders he soldiers to take him and the guild. Before that can happen, Ranulf and a group of soldiers from Gallia enter the castle and chase away most of the Daein soldiers.

Petrine refuses to stand down at first but when the Black Knight arrives, she withdraws from the area. Greil and the Black Knight exchange glances with each other. No doubt Greil himself knew the identity of the man concealed in ebon armor. Later that night Greil and Ike talk about the future of the guild as they walk into the forest. Greil commends Ike for a job well done thus far before going further into the forest alone.

It turns out the Black Knight was waiting for him in the forest. Greil takes out Urvan and the two clash blades—Urvan against Ragnell. Despite the obvious disadvantage Greil’s weapon has against his opponent’s, he holds his own for the time being. Displeased with the way their duel is going, the Black Knight offers his own sword to Greil and unsheaths a similar-looking sword, Alondite, from his pack.

When asked by Greil what his motive is, the Black Knight explains that he has long awaited the day he could challenge General Gawain, Rider of Daein. Greil remarks that he since discarded the name “Gawain”. At the same time, he tosses Ragnell away and brandishes Urvan. “Do you want to die?” the Black Knight asks in amazement. Greil replies, with a hint of amusement, that he knows who the Black Knight is and tells him that he cannot prevail against his former teacher.

Ike knew that one day he would replace his father as leader of the Greil’s Mercenaries. Fate decided that the day would come much sooner than anyone expected. In an instant, the duel is ended. With one swift blow, the Black Knight impales Greil with Alondite.

“Is that all there is? No challenge? No resistance?” the Black Knight asks in disappointment as he removes his sword. Mortally wounded, Greil begs Ike to forget about avenging him and take care of his sister and the guild. As Ike carries him back to the place where the guild is staying, Greil dies. They bury him nearby and use his favorite axe as a grave marker.

Although Ike technically didn’t honor is father’s last wishes in Radiant Dawn, it may have been his father’s memory that spares King Caineghis from Ashera’s Judgement. When he and Giffca meet up with the other survivors he presents Ike with Urvan, saying he had a feeling he would need the last part of his father still in this world.

When Ike defeated Zelgius he learned the reason he wanted to fight Greil was like Ike, he was trained by Greil when they were soldiers in Daein. However he was unaware that, between when they were soldiers in Daein and when they fought that night, Greil crippled himself. When Zelgius learnt Ike had been trained by his old master, he became hopeful of once again seeing the rare form of swordplay most only know after they’ve been slain by it. Ike asks Zelgius if he could see his father in his swordsmanship. Zelgius commends him, saying he did and that Greil couldn’t have chosen a better person to carry on his legacy.