Of Countries and Kings 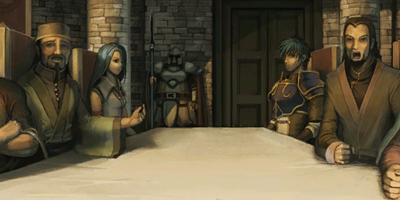 While stability returns to Daein, the same cannot be said of its neighbor, Crimea. Its new queen, Elincia is still very young, and in the minds of many of the nobles too inexperienced to be a good ruler. Their overly-critical opinion towards her reaches a peak when she recognizes Daein’s new king, Pelleas. Distrust of their neighbor runs high among the nobles and most share their worries with the queen herself. After one such meeting, Queen Elincia takes to the skies hoping to sort out this turn of events against her. She encounters the heron Leanne and the elderly raven, Nealuchi in her flight, and following them a group of Begnion Wyvern Riders intent on capturing the heron. With the aid of her knight, Marcia, Elincia succeeds in driving the intruders back. Curious as to why the two laguz are in Crimea, Elincia invites them back to the Crimean capital of Melior, though this act only drives a wedge further between her and the nobles of her court. Elincia learns that Leanne is seeking Crimea’s hero, Ike, who helped Elincia reclaim her throne. Ike and his band however have disappeared. Until they are found, the queen requests they remain with her as her guests.

While many of the nobles are critical of Elincia’s reign, none acted on it. That is, all except one. In the countryside town of Oma, two former fighters in the Mad King’s War, the farmer Brom and his friend, Nephenee, overhear a plot against their queen. An odd purple-haired man is heard recruiting men and arming them for battle. Unable to remain silent, the two speak up and a battle ensues. After fighting off the recruits and meeting the alluring thief Heather, the instigator of this brief uprising is killed, but not before he reveals the greater plot at work. Brom and Nephenee learn that this man is a pawn of Ludveck, the powerful Duke of Felirae. It is the duke’s plan to overthrow Queen Elincia and take the kingdom for himself. Alarmed by this revelation, the pair journey to Melior to warn their queen of the impending storm.

Upon learning of the uprising in the countryside, Elincia attempts to resolve the matter with as little bloodshed as possible. She decides to first find proof of Brom and Nephenee’s claim before taking any action. Lucia, her milk-sister, and loyal bodyguard volunteers to go to Ludveck’s castle in Felirae and uncover any evidence to support the account. Leanne and Nealuchi choose to accompany her. Upon their arrival, they are greeted warmly by their host. After staying for an undetermined amount of time, Lucia discovers a cave on the castle grounds. In that cave, she discovers a document implicating the duke as a traitor. Lucia escapes Felirae with the document in hand, but not before killing another of Ludveck’s agents who had discovered her. While Lucia returns to Melior unharmed, this event alerts Ludveck to her deception.

Once in Melior, Elincia is saddened by the news brought by her friend. The queen decides the best course of action is to arrest the duke before he can strike and plunge Crimea into civil war. She expresses despair over the recent events, but after some encouragement from Leanne, she decides to press on. Elincia sends her knights led by Lucia’s brother, Geoffrey, to Felirae to apprehend her enemy while she flees the capital for the safety of nearby Fort Alpea. The knights do battle outside the gates of Castle Felirae. Though many rebels are killed, they discover Duke Ludveck is nowhere to be found. Geoffrey guesses they’ve walked straight into a trap meant to draw them away from Melior while the rebel force attacks. He orders a beacon lit to signal his sister who is in the captail awaiting news of the battle. Meanwhile, to defend his queen, he begins to lead his troops to Fort Alpea. 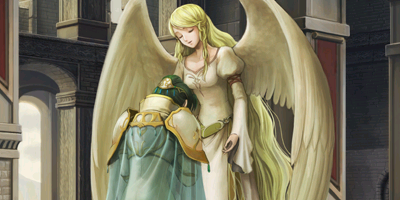 After seeing her brother’s signal, Lucia also guesses the battle was nothing more than a ruse. She leaves the castle to warn her queen of the danger heading her way via her network of spies. She arrives at a contact point, a village house, only to be roughly seized and dragged inside. She discovers, to her horror, she has fallen into Ludveck’s hands. The duke interrogates Lucia hoping to determine the queen’s location. Though she refuses to answer any of his questions, it proves to be of no help to the queen as the duke has already learned of Elincia’s whereabouts. He leaves with his army with Lucia as his captive, but not before leaving a bundle of Lucia’s hair as a message for the queen.

Queen Elincia learns of her milk-sister’s fate the next day and fears for her greatly. She resolves to not only stop this rebellion, but save Lucia as well. With the aid of the Wyvern Rider Haar, Brom and Nephenee, the sage Calill, and laguz, Leanne, Nealuchi, and the two beasts, Lethe and Mordecai, the queen rallies her troops for a final stand. Their wait is short as Ludveck’s army arrives at the fortress ready for battle. Elincia at first chooses to wait-out a siege to allow Geoffrey and his troops time to reach them, but a servant on the side of the rebels opens the fort gates allowing the enemy to enter, turning the wait-out into an actual battle. Ludveck himself leads the final charge. At first, the battle appears to turn in favor of the duke, though Elincia and her forces fight hard. The tide turns when Geoffrey arrives much earlier than expected. With his forces falling around him and facing the onslaught of the queen and her knights, Ludveck surrenders and is taken prisoner. The rebels flee the fort upon their leader’s capture. Elincia hurries to speak to her enemy and force Lucia’s location from him, but is alerted to the rebels presence just outside the fort.

Much to Elincia’s horror, Ludveck has prepared one last assault, though a much more underhanded one. His men gather around the gallows outside Fort Alpea on which Lucia stands about to be hanged. The soldiers give Elincia an ultimatum: she can either release the duke or watch her friend die. The rebels give Elincia only half an hour to decide Lucia’s fate. The queen speaks to Ludveck in prison hoping to learn why he’s sunk to such a level. He tells her that she is not fit to rule; that while she is a kind woman, she must also be ruthless as a queen. She learns this rebellion was a test to see if she could prevent a civil war. The duke reminds her that with Lucia’s life at stake, she has only one choice: free him and surrender her throne. Elincia however refuses Ludveck’s offer telling him that since he cares nothing for the people of Crimea and seeks his own interests first, he has proved himself unfit to be a king. As she leaves, the duke admits defeat but hopes that she’ll return to him weeping over her choice.

Elincia declares that Ludveck will not be freed. Lucia shows pride at her queen’s decision knowing that though it will cost her life, Crimea will go on. She praises Elincia before her execution begins. As she is hanged, an arrow flies from out of nowhere severing the rope around Lucia’s neck, and she falls from the gallows into the arms of none other than Ike himself. Ike draws his sword with the unconscious Lucia slung over his shoulder and engages the rebels. The other members of the Greil Mercenaries emerge from the crowd one-by-one and overtake the surprised rebels. Lucia is handed off to Ike’s sister, Mist, and the healer Rhys who succeed in healing her, and she regains consciousness. 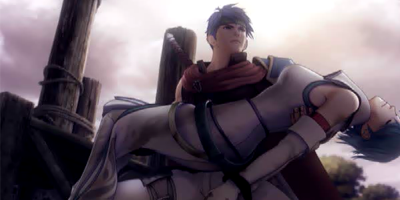 Later, after Elincia and Lucia are reunited, Ike explains that Count Bastian had approached him. He reveals Bastian predicted Ludveck’s plans and hired the Greil Mercenaries to follow the rebel army to thwart the duke. For this mission, secrecy was necessary and so Ike had to disappear until the time was right. Elincia reflects over the past few days and realizes if she were again forced to make a choice between her friends’ lives or the life of her country, she would again choose Crimea. With resolve, she decides the surviving rebels will be wiped out to prevent them from stirring up disorder among the people. In a private conversation with Ike, Elincia reveals that Bastian had been investigating the ruins of the fallen Nados Castle, where Ike challenged the Black Knight in the Mad King’s War. His findings indicate the Black Knight is still alive. Hearing that his enemy lives on, Ike decides to go to Daein.