When the war between Daein, Begnion, and the Laguz Alliance reached its peak, chaos abounded causing the Fire Emblem, the simple, bronze medallion carried by Mist, to glow wildly. Knowing the legends of the dark god sealed within the medallion, a decision was made to release the deity with the Galdr of Release. This was not without risk; all were familar with the accounts of how the dark god drowned all other lands. Still, they believed that were the dark god released by war, the aftermath would be catastrophic making the Galdr of Release a necessary risk. After the song was sung by Micaiah, a blinding light overtook the continent of Tellius. When the light faded away, Ike discovers nearly every warrior on the battlefield, beorc and laguz alike, turned to stone; he, the Greil Mercenaries and a select few others, including Micaiah, Sothe and Queen Elincia, were unexpectedly spared this fate. 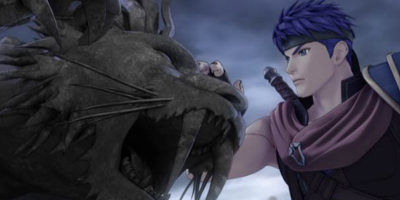 Micaiah soon begins to speak in a voice not her own. In fact, this voice belongs to someone quite childish. The company learns that she is being inhabited by none other than the freed dark god, who, as it happens, is not a dark god at all. She is Yune, the Goddess of Chaos and the emotional counterpart to the goddess Ashera. Yune surprises everyone by revealing that it was Ashera herself who turned the people of the continent to stone, and she will do so once again until all of Tellius has been petrified, so that she may create a new world; a world void of life. Alarmed by this, they ask how they may stop Ashera. Yune tells them that they may be able to save the people if they can reach the Tower of Guidance, the great tower in the middle of Sienne, the capital of Begnion. The once-separated armies unite under Yune to accomplish this task. To prevent Ashera from striking them all and ending any hope of restoring Tellius, Yune has the armies split into three groups with each taking a different route to the captial. Micaiah takes command of one, Ike leads the second, and Tibarn heads the third. After Yune blesses Ike with her power, the groups disperse.

Micaiah and Ike’s bands rush through the snow-covered countrysides of Begnion. Both are met by soldiers clad in gold. Ashera has already discovered them. To impede their progress, the Goddess of Order revived those loyal to her and gave command of this army, the Disciples of Order, to Lekain, head of the Begnion Senate. The two groups fight their way through Lekain’s forces and continue on.

Tibarn takes the road through the forests to reach Sienne. Along with Elincia, the Hawk King and his forces soundly defeat the group opposing them including Senator Valtome.

Micaiah’s journey leads her and her company through the Grann Desert with the Disciples of Order relentlessly pursuing them with Lekain himself at their head. There among the dunes, another supporter of Yune’s cause was met, the Branded swordfighter, Stefan. It was also there that Empress Sanaki learned a startling truth. She was unable to hear the voice of the goddess because she was not the firstborn Apostle; she had an older sister. Though the shifting sands made the battle difficult, it ended with a victory for the Silver-Haired Maiden. The young empress was left pondering the news she received, but she continued on with the rest of them.

Ike’s path brings him to an all-too-familiar place: the manor belonging to Oliver, the Duke of Tanas. Ike brought the rather large nobleman’s secret dealings to light during the Mad King’s War, and Oliver was presumed dead. However, it was not the case as Ike learns that Oliver lives. Saved from death by his fellow senators, the pompous tub of lard had been living in secret here. After catching sight of the heron prince Rafiel, Oliver declares he will join with Ike, much to the latter’s disgust.

A slight detour was in store for Tibarn. The army is met by Count Bastian of Fayre who requests aid in capturing a man who had escaped from him. The man is none other than Izuka, a madman of Daein who served King Ashnard and later King Pelleas. Knowing that Izuka created the Feral Ones, laguz driven mad by a strange formula, Tibarn gladly aids in his recapture, though he expresses that he would rather kill him. After defeating a number of Feral Ones, the group clashes with Izuka, though they are forced to kill him. Bastian expresses sorrow over this, not over Izuka’s death, but that the only chance of reversing the madness induced by his formula is lost. When Elincia questions him on this, Bastian shows her a man who has become like a Feral One; a man Elincia never believed she would see again, her uncle Renning. Bastian explains that Renning had not been killed by Ashnard, but kept hostage and given Izuka’s formula turning him into the famed Rider Bertram. Bastian had saved Renning after that battle three years ago and nursed Renning back to health in body but not in mind. Though Izuka is dead, they succeed in restoring Renning’s mind through Reyson’s Galdr. 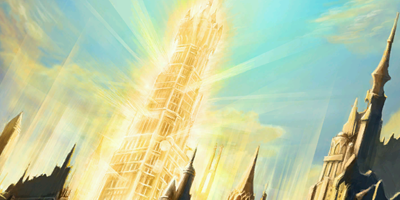 At last, the three groups reunite at the Tower of Guidance. As they prepare to storm the great spire, the Disciples of Order arrive; spared death by Ashera’s might. Knowing they must reach Ashera quickly, Yune selects seventeen of her forces, including Ike, Micaiah, Sothe, Sanaki, the dragons Ena and Prince Kurthnaga, and one heron decide to climb the tower while the rest of the forces hold off the gold-colored soldiers. Shortly after setting foot inside, they are met again by Lekain. They battle the senator once again and slay him at last. After Lekain’s death, the Blood Pact of Daein is destroyed, freeing Micaiah’s country from its curse. King Naesala of Kilvas finds a similar pact that had bound his country to Lekain’s service also.

Ike soon confronts an old foe in the tower; the Black Knight himself. The former Rider of Daein attacks him and engages Ike in a duel. Ike surprises the Black Knight by revealing his identity. His father’s killer is General Zelgius, a great general of Begnion and friend to Ike, himself. Zelgius tells Ike that he had hoped to see his old teacher’s strength in swordsmanship, and that is why he fought with Greil. Upon learning that Greil had crippled himself, Zelgius felt as though he had not seen the true power his instructor once had. That is until he fought Ike. Ike accepts the challenge and the two fight again, separated from the rest of the group by a barrier set up by Zelgius. The duel soon ends with Zelgius being mortally wounded by Ike’s blade, Ragnell. With his dying breath, Zelgius congratulates Ike and thanks him for showing him Greil’s true strength. After his passing, Ike takes possession of Alondite, Zelgius’s sword.

During the climb, Yune begins to see the memories of her past and Zelgius’s past. When war first broke out between the beorc and laguz, the Great Flood was caused by Ashera destroying all the world save Tellius. Ashamed at what she had done, Ashera decided to discard her emotions, which became Yune, and intended to destroy her counterpart, feeling it was the only way to prevent such an event from ever happening again. Someone, however, intervened on the goddess’s behalf and had Yune sealed away within a medallion instead.

Next, the group faces the oldest being on Tellius: Dheginsea, the King of Goldoa. Dheginsea informs them that they have earned the wrath of Ashera through their failure to keep peace. Therefore, the dragons of Goldoa and he will oppose them. After fighting off the dragons, Dheginsea is killed, naming his son Kurthnaga as the new king before he dies. Another memory comes to Yune, a memory of a man pleading with Dheginsea to come to the aid of the laguz in Begnion, though the dragon king refuses.

The group next comes to the great door leading to Ashera’s chamber only to find it sealed. Here they are approached by Sephiran, the Prime Minister of Begnion. He tells all; everything that has happened was his doing, including the Mad King’s War; he told King Ashnard of the power contained within the medallion, knowing the king would not be able to resist such a temptation. He tells why: he planned to awaken Ashera so she could destroy the world, a world he has grown to despise. Sephiran tells them that they must kill him, for the door will not open unless he dies. Though it breaks the heart of Sanaki, they fight him, and he dies in the empress’s arms. It was quite possible however that the blow did not kill him. Following Sephiran’s death, Yune receives yet another memory; a memory of the same man who begged Dheginsea for aid and who saved her from destruction.

It is the memory of the heron, Lehran, as he strikes a bargain with Ashera. If the people of Tellius can truly live together in peace for 1,000 years, then Ashera will join with Yune once more. She hopes to one day be able to hear her true name, Ashunera, once again. However, if at the end of 1,000 years, the beorc and laguz cannot turn away from war, she will instead bring judgement upon them. She informs Lehran that if he either feels certain of peace or feels the world is beyond hope to awaken her with the Galdr of Release, and she will hear their case. Possibly, Yune saw more shreds of the past there; Lehran met with Misaha, grandmother to Empress Sanaki and one of his descendants. When Misaha spoke to him, she declared her intentions to announce herself as a Branded, and Lehran encouraged her to do so. The next day, however, he learned that Misaha had been killed and the blame had been placed on the herons of Serenes. When he saw the forest burned and his fellow herons murdered, Lehran fell into despair wishing to awaken Ashera and put an end to the world. 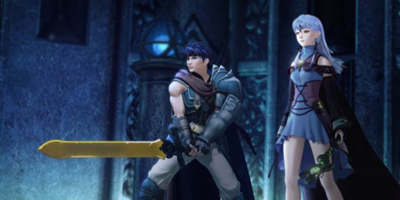 Finally, the group reaches Ashera herself only to find her cold and indifferent to them. Even after learning that a child could be born from a beorc and a laguz, she deafens herself to their pleas. Unable to persuade Ashera, Ike fights her. It is unsure, though some say Sephiran survived despite his wounds and realized he was wrong; he takes up his true name, Lehran, and lends his powers to Yune. Though Ashera is powerful, she is bested by Ike’s blade in the end. With the power of Yune aiding him, Ike delivers the final blow, and Ashera turns to dust. From her ashes, a blue flame, Yune herself, emerges and takes the shape of child. Yune apologizes to Ike, saying that she has failed them all; that the world has no use for her. Ike reassures her however, and Yune restores the people turned to stone before departing from the world. As the people return to normal, the soldiers drop their weapons, at last bringing the war to an end.

Outside the tower, the groups bid farewell before returning to their own lands; towards whatever future they have waiting for them.

Though hardly any of the old group lived to see this day, if this day ever came, Lehran returned to the Tower of Guidance 1,200 years later to witness the return of Ashunera herself.