This event occurred in the year 625 of the Begnion calendar, twenty years before the beginning of Path of Radiance. It resulted in the heron tribe being practically wiped out and the Serenes Forest ruined. 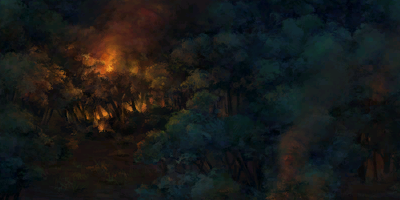 The chain of events leading to the Serenes Massacre started with the assassination of Apostle Misaha, the ruler of Begnion. Rumours emerged that the ones who plotted her death were the herons of Serenes. Nights later, the enraged citizens of Begnion gathered at Serenes Forest and ravaged the forest and its inhabitants. After just three nights, the Kingdom of Serenes was no more. The only known survivors of the genocide were King Loraziah, who fell into a deep coma, and his son, Reyson.

Afterwards, the Hawk tribe declared an oath of vengeance and started attacking Begnion ships. The citizens of Begnion came to deeply regret their actions. Most people knew that the heron tribe lived a life of peace and weren’t capable of exhibiting violence. However, after losing their beloved ruler, the citizens were blinded by grief and rage, which they took out on the herons.

In Path of Radiance

Twenty years after the massacre, the Greil’s mercenaries, working for Begnion’s Empress Sanaki, attempt to expose Laguz slavery within Begnion’s upper echelon. At the Dukedom of Tanas, they manage to free Reyson, who was sold out by his close friend. It is then that they first discover the existence of the Serenes Massacre.

Soon afterwards, the Greil’s mercenaries enter the dark and lifeless Serenes Forest to chase after Duke Tanas. Halfway through the forest, they discover Leanne, a previously unknown survivor and Reyson’s younger sister. After Duke Tanas is defeated, Reyson and Leanne reunite. Leanne explains that her sisters put her to sleep with their galldr and that she had slept for 20 years.

Once the fighting has calmed down, Sanaki appears to meet the heron siblings. She acts as a representative of the citizens of Begnion and apologises for their past actions. Leanne accepts the apology. Reyson refuses at first, but, after Leanne states that she doesn’t want him to be lost to hatred, he accepts the apology as well. Finally, Reyson and Leanne perform a ceremony in front of the forest altar. They sing the galldr of rebirth together and restore life to the forest.

Later on in the campaign, it is discovered that another heron survived the massacre- Reyson and Leanne’s elder sister, Lillia. However she, along with Lehran’s Medallion, was taken by Daein’s King Ashnard on the night of the Serenes Massacre and, afterwards, she died in captivity. From this, it seems that Ashnard was the one who plotted the Serenes Massacre.

The Serenes Massacre was the main reason the Laguz declared war on the Begnion Empire. During the liberation of Daein, Micaiah meets with Rafiel- the eldest of the Serenes royal children. He explains that he was abducted by hunters before the massacre, and thus survived. After Daein is retored, Rafiel leaves for Gallia, to reunite with his siblings. There, he explains the truth behind the Serenes Massacre-
that it was caused by the Begnion senate.

Whilst loved by her citizens, Apostle Misaha was seen as an obstruction by the imperial senate. Her declaration of the Laguz Emancipation Act opposed their ideals of beorc being superior to laguz. Her fate was finally sealed when she planned to reveal her identity as a Branded- the greatest secret of the imperial family. Because the revelation would cause disaster for their teachings, the senate, headed by Lekain, decided it was necessary to remove her.

For a long time, the herons of Serenes had denied the Apostle’s position as the voice of the Goddess. This was a result of the First Continental War, which ended more than 100 years ago, when Begnion used the Goddess’s name to invade Tellius. The senate decided to kill two birds with one stone, by using the herons as a scapegoat for Misaha’s assassination, therefore removing two of their major obstacles.

Lehran, ally of the Three Heroes, was also involved in the massacre. After disappearing from history, he reappeared many hundreds of years later to speak to Apostle Misaha and find a way to resolve the troubles between beorc and laguz. It was this meeting that prompted Misaha’s radical actions before her death. After Misaha was assassinated, Lehran witnessed the Serenes Massacre, helpless to prevent it. It was then that he made the decision to plot humanity’s end.

After the war, Sanaki returns ownership of Serenes Forest to the heron tribe. Following this, the three bird tribes decide to live together there and a new Kingdom of Serenes is established, ruled by Tibarn. At the forest, Rafiel, Reyson and Leanne perform a ceremony together and successfully awaken their father, King Loraziah. Loraziah also convinces Lehran to live together with the other herons. With this, the Serenes Massacre is finally resolved.