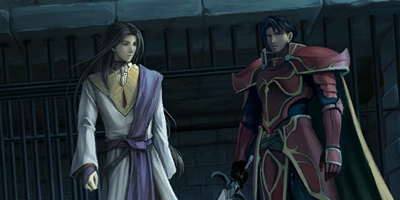 One is a high ranking knight of the Begnion Empire. The other, the Duke of Persis in the Begnion Empire. Despite the power, prestige and honor Zelgius gained as a citizen and solider in the service of Begnion, the only man whose will he will bend to without question, without hesitation is Sephiran’s.

No time table is given but it’s believed the two met after Zelgius become a renowned knight of Daein. The two met privately inside a room where Zelgius confided in Sephiran about his past youth before he came to Daein and in the process reveals that he is one of the Branded—one born with Beorc and Laguz blood flowing in their veins.

Zelgius always wears armor because his mark, or Brand is located on his lower back. Upon learning this, Sephiran apologizes for the shame Zelgius has had to live with. It’s never actually stated doing their first meeting but it’s possible Sephiran tells Zelgius that he is really Lehran. In the end Zelgius agrees to leave Daein with Sephiran.

Sometime after their first meeting, the two enter a town that appears to have been the site of a massacre. Zelgius is shocked when he recognizes the unconscious man who appeared to have been the one who committed this atrocity: Gawain, his old commander. Sephiran inspects the woman lying dead next to Gawain and notices she is holding Lehran’s Medallion. Before he can retrieve it, their children—a young Ike and Mist—emerge from a nearby house.

Ike is horrified at the sight of the carnage. Mist, too young to understand what happened grabs the medallion and takes it inside. Sephiran is relieved when he notices it has no ill effect on her. After burying their mother and moving Gawain inside, Sephiran erases the memory of what happened from Ike and Mist’s memories.

The two are not seen together until after Crimea falls during the Mad King’s War. Zelgius—under the guise of the Black Knight—has a chance meeting with Sephiran. Sephiran helps Ranulf escape certain death at the hands of the then-infamous Daein Rider.

When corrupt senators seize power in Begnion, Sephiran is imprisoned. Upon learning this, Zelgius leaves in the middle of a battle to free his master. It is at this point that Sephiran decides that it’s time the world know the wrath of the Goddess Ashera.