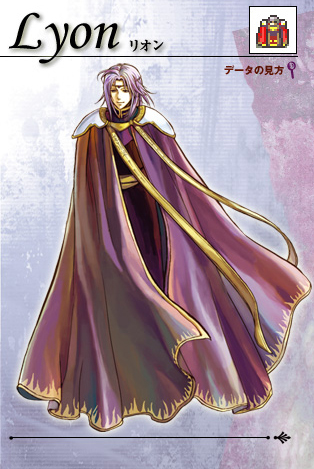 Lyon is the crown prince of the Grado Empire and the primary antagonist for the majority of the game in The Sacred Stones.

Lyon is the firstborn, and apparently only, son of Emperor Vigarde of Grado. Three years before the War of the Stones, Lyon first met Princess Eirika and Prince Ephraim of Renais. In spite of his shyness, Lyon waited for the siblings to arrive in Grado because he had no friends his own age. The prince found the twins’ company enjoyable, and the three grew to be very close. In his life, Lyon was skilled in the art of magic, and he sought only to use his talents for the good of his country. Though his intentions were admirable, Lyon’s unshakable love for Grado and for his father proved to be his undoing.

Two years prior to the war, Vigarde fell ill. Lyon, desperate to find a cure, began doing research on one of the holiest relics on Magvel, the Sacred Stone, over the course of the next year and a half. Lyon found the Stone of Grado more susceptible to his magic because it contained the soul of the evil king Fomortiis. Inspired by this, Lyon continued his research believing it could save his father. When Vigarde died one year after his research began, Lyon refused to relent and instead decided to find some way to resurrect his father. To this end, Lyon split the Sacred Stone of Grado, also called the Fire Emblem, in two. The sacred segment, the Fire Emblem itself, was crushed as Lyon found the other half, the Dark Stone, to be far more powerful. Whether he’d forgotten or chose to disregard the danger of the Demon King’s spirit, none can say. As a result of his experiments, Lyon became possessed by Fomortiis, becoming little more than his puppet. With the power of the Demon King now controlling him, Lyon was able to, in part, resurrect his dead father, though Vigarde was nothing more than an animated shell of a man with no emotions or even the ability to speak.

Under the influence of Fomortiis, Lyon led Grado into war, first turning on the Empire’s ally and neighbor Renais. The now-dark prince had only one intention in this war: to destroy the remaining Sacred Stones. Over the course of the war, Lyon encountered his old friends. Conversing with each of them, he gave Eirika false hopes that somewhere the true spirit of Lyon still remained, while he led Ephraim to believe there was nothing left of him; that he was entirely under the control of the Demon King. Though Lyon failed several times in his attempts to seize the Stone of Renais, he did succeed in the days leading to the war’s end. He either tricked Eirika into believing that with the power of the Stone, he could expel the Demon King from his body and thus regain his life, or he wrestled it away from Ephraim by force. Either way, with the Stone of Renais destroyed, Lyon journeyed to Darkling Woods after sending the fallen priest Riev to destroy the final Sacred Stone: the Stone of Rausten. Once in Darkling Woods, Lyon entered the place of his master’s downfall: the Black Temple. There, he faced Eirika and Ephraim for the last time. Though his magic, which was enhanced by the might of Fomortiis was powerful, he was defeated and killed by his old friends. With his last breath, he confessed his envy of Ephraim’s physical strength and his love for Eirika. Lyon, the once-honorable Prince of Grado, was dead.