Reclassing is a feature that allows you to directly change a character’s class to one of several classes, ranging from Cavaliers to Curates. After Reclass, a character’s Level and Experience remains the same, but their other stats (like HP, Strength) and weapon proficiency may change.

You can Reclass characters as many times as you want (from Chapter 1 and onwards, and in the battle preparations menu only), although there are limits on the amount of one class you have. So don’t expect to have a full army of Myrmidons, for example. 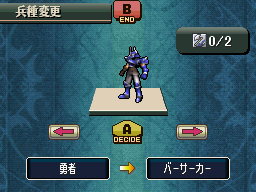 Also, characters whose class is Lord, Thief, Dancer, Chameleon or Manakete cannot Reclass. Promoted classes can still Reclass, but they can only change between promoted classes, eg. Dracoknight, Bishop.

The amount of one class that you can have, at a given time, is:

1 + the number of characters with the same class that you could have recruited up to that point (including characters from sidequest chapters, but not including My Unit, Michalis or the faceless replacements).

For example, by the end of the game you should be able to have a maximum of 5 Mercenaries or Heroes (from: 1 + Ogma + Caesar + Astram + Samson).

If a character cannot use a weapon type in their new class, but could in their original class, that weapon type’s level is lost (but gained Weapon Exp remains).

Characters are divided into three class sets: Male A, Male B and Female.

During the beginning of the game, characters can only Reclass to classes in their set, with their initial class determining what class set they’re in. For example, Luke is a Cavalier so he’s in the Male A set.

After beating the game in Hard mode or above, Male sets A and B will become combined, so male characters can Reclass to any class from both sets.