The game is a remake of Book 2 of Mystery of the Emblem, for the Nintendo DS. It will be released in Japan on 15th July 2010; no release date has been announced for other territories yet. As well as the standard single-player mode, a Wireless/Wi-Fi multiplayer mode will feature, allowing a maximum of 2 players to play (so far, so similar). The game’s graphical style is almost identical to Shadow Dragon.

For reference, here are most of the scores that the previous games got from Famitsu, credits to Game ~mein~:

Another update for the official site.

Introduction Video – Along with the game’s commercial, this can be accessed from the site’s front page. It briefly introduces the various basic concepts of the game, such as My Unit, battles, comrades and Wi-Fi options. At the very end, it describes the difference between Casual and Classic mode (for instance, characters have different quotes when they reach 0 HP), as well as the Guide function. Fans probably won’t be surprised that forging makes a return and that female characters can now Reclass to Cavaliers.

Commercial – There are five versions of the commercial – Tactics 1, Tactics 2, My Unit, Casual Mode and Special. The last one, which has the male host singing the opera version of the Fire Emblem theme, won’t be televised. Overall, the commercials seem lighthearted and aimed at casual gamers, as the male and female hosts casually chat while playing the game.

Characters– Malice is a tomboyish mercenary hired by the Akaneian empire. Sirius and Roro are both mysterious masked characters. Hardin is the 24th ruler of Akaneia and one of the game’s primary antagonists.

An official guidebook to commemorate the 20th anniversary of the Fire Emblem series was released (and officially announced…) in Japan on 30th June 2010. The book covers the entire series and features various character and miscellaneous artwork; you can view some sample pages from the publisher’s site.

Despite being advertised as featuring artwork from this game, only a few artworks appear to be present – the only ones that we haven’t seen being Hardin and that of a new masked, axe-wielding character named Roro. Presumably we’ll also see these artworks when the official site updates again.

The following sections have been updated.

Characters – Katarina, Rody and Luke are all members of the 7th platoon of Altean knights (which My Unit is a part of as well). Rody always keeps a calm composure, while Luke is rash and stubborn. Shiida/Caeda is the princess of Talys and Marth’s fiancee.

Basics of Battle – The Weapons subsection contains information on the weapon triangle and class weaknesses, and includes two videos. The Classes subsection briefly describes some of the unique traits of classes, Reclassing and promotion, and includes four videos. It also contains a link to every playable class in the game. All the Shadow Dragon classes return, except Ballisticians who have been axed in favour of sword-wielding Dancers. 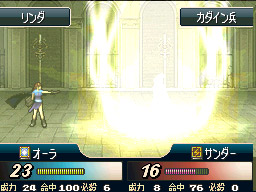 Expanding the fun of New Mystery of the Emblem – First unveiled yesterday in Nintendo Dream, a remake of the BS Fire Emblem games, known as Shin Akaneia Senki (the original was entitled BS Fire Emblem Akaneia Senki, Senki meaning “war records” or “chronicles”), will be included.

Hopefully there will be complete scans soon, but here are some of the known details for now.

A number of new characters are introduced including Altean knights Luke and Rody, Sirius the masked knight and Malice, a female sellsword. The first three characters appeared in the original Mystery of the Emblem, while Malice appeared in the first of the BS Fire Emblem games.

The BS Fire Emblem chapters will be included in the game’s Extra Mode. These chapters, originally designed for the Satellaview add-on for the SNES, took place chronologically before the beginning of Shadow Dragon. This will be the first time since 1999 that players can properly play these chapters (although I have a feeling the original voice-acting will be absent).

The remaining three sections of the official site are now available to view.

What is Fire Emblem? – A brief discussion of what a Fire Emblem game is like and what this game is about.

Basics of Battle – Describes the flow of battle and includes a video. Clearing a map typically requires conquering the enemy’s castle or base, but the site mentions there are some battles where the victory condition might be slightly different. If Marth or My Unit’s HP reaches 0, the player receives a Game Over. At the very bottom are two subsections Weapons and Classes, which have yet to be added. 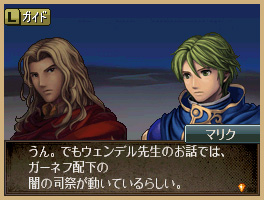 Expanding the Fun of New Mystery of the Emblem – Contains various topics about the new features added to the game, including: My Unit, Casual Mode, Character relationship diagram, Downloadable content, Saving methods, Communication battle, Loan unit and Online Shop. Most of the details have already been revealed elsewhere or are identical to Shadow Dragon. The most interesting new detail is that the downloadable maps are confirmed to be new chapters. Episode 1, “Wind and Thunder”, seems to focus on Merric and Ellerean, possibly before the main game begins.

The Japanese media are widely reporting details about the game. It’s mostly things we already knew though.

The only real new detail is that the game boasts “over 300 conversation events that affirm character’s bonds”. What this exactly means is unknown, as it could be referring to events in general, base conversations and/or support conversations. We’ll probably find out soon anyway.

Now that there’s a larger version of the game’s boxart, you can see that the game’s code number includes “TWL”. I’m not 100% sure, but this seems to suggest that the game will be released on a DSi-enhanced cartridge; the game should run on all DS models, but may contain enhancements when run on a DSi. Unfortunately, in what appears to be the trend these days, one of these enhancements could be region-locking for DSi owners. Don’t quote me on this though! 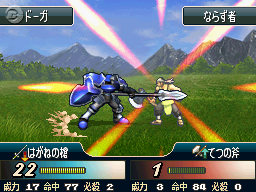 The enemy has been confirmed to be a Barbarian

Some eagle-eyed fans have noticed an odd-looking enemy, which looks like a Pirate, but has yellow clothing. If it’s anything like the original, I’m guessing that enemy is probably a Bandit.

The setting of the game appears to be the same as the original Mystery of the Emblem. Following the events of Shadow Dragon, Hardin, the prince of Aurelis and Marth’s trusted ally, ascends as the emperor of the holy kingdom of Akaneia. Marth receives orders from Hardin to suppress rebellious nations and so he leaves Altea on an expedition.

The “Light and Shadow” in the game’s title refers to the two heroes of the game – Marth and the player’s custom character, dubbed the “My Unit”, a member of the 7th platoon of Altean Knights. Before Marth’s journey begins, there is a prologue (likely comprised of a few chapters like in Shadow Dragon) that introduces My Unit into the story. This prologue also acts as a tutorial, where players can learn the basics of game.

Marth and My Unit were already shown on the official site, but this is the first time we see Shiida/Caeda, as well as a brand new character called Katarina. Katarina is the purple haired girl with an extremely worried expression. She joins the Altean Knights along with My Unit and aspires to be a Tactician.

There is a brief section on My Unit customisation, but it doesn’t offer many details. The magazine does mention Knights and Pegasus Knights as being possible class choices. More interestingly though, there will be new Base Conversations akin to those found in Path of Radiance and Radiant Dawn, where My Unit can speak with other characters before the beginning of the battle.

Otherwise, the rest of the magazine contains information that was already revealed (well, leaked) in the earlier retailer meeting. This includes things like four difficulty settings and Casual/Classic mode. As some fans suspected, difficulty and mode are independent of each other (so you can play Classic Lunatic or Casual Lunatic, etc.). The downloadable maps seem to be new chapters (or perhaps Trial Maps like in Sword of Seals or Path of Radiance).

According to Japanese sources, New Mystery of the Emblem was brought up at one of Nintendo’s occasional retailer meetings. Below are some details that were discussed. I’m sort of hesitant to post this since I cannot find the original source, but it apparently comes from the same source who leaked details of Shadow Dragon
early (and got everything correct, such as the difficulty levels and new classes – I just never decided to post it back then).

You can set the following details:

This includes 13 hairstyles, 10 hair colours and 10 types of eyes.
There are even Mohawk and Afro hairstyles. You can set eyes to be closed or have eyepatches, and there are also mouth masks.

You can find the game’s official site here. Right now only the following sections are open:

Story – Briefly describes the events of Shadow Dragon, where Marth joined forces with Hardin to defeat Medeus. One year after the war’s end, a youth visits Altea with the aim of becoming one of Marth’s trusted knights. Also includes a short chronology of the continent of Akaneia (this has been translated multiple times, so I’ll skip it for the time being).

Characters – Currently only includes two characters: Marth and My Unit. My Unit, which has its own section, is one of the main characters of the game and they’re created by you. Their profile describes them as a youth of Altea who volunteers to join the Altean Knights.

My Unit – Similar to the Tactician feature in Blazing Sword, the player can make their own character who participates in the game’s story. You can choose your own name, gender, appearance, starting class and background. There are many conversations that your character can have, such as gaining hints for upcoming battles or just getting intimate with your comrades. Not only that, but there will be brand new chapters that are deeply related to your custom character. The prologue chapters follow your character’s rise from a rookie Altean Knight to one of Marth’s personal guard. Meanwhile, sidestory chapters are new maps that can be unlocked by satisfying certain criteria. Maybe you can recruit some new characters here, such as Shadow Dragon‘s Wrys…

The sections to be opened are What is Fire Emblem?, Battle Basics and Expanding the Fun of New Mystery of the Emblem.

Besides the teaser video, which doesn’t show any gameplay footage, the preface offers an interesting tidbit about the game.

“It has been 20 years since the birth of the first Fire Emblem.
Up to now, many stories about heroes have been written.
We believe the players who guide and support them are the Heroes of Shadow.”

A translation of the text in the teaser video.

“There is not a soul who does not know the name of Marth, the Hero King who saved the world
But there are few who know of “that person”‘s name
Marth swings his blade in battle
By his side are many renowned heroes…
As well as “that person”‘s figure
“That person” was Marth’s confidant and friend
A shadow who supported Marth’s victories
The history books held no record of this hero of shadow
Another main character of the War of Heroes
Their name was—“