This can be accessed as long as there is a compatible Wi-Fi access point. To begin the download, go to Wi-Fi Communications, which is found in the Extras menu, and then go to Download.

Afterwards, the downloaded content will be located in the Additional Bonus section in the Extras menu and can be accessed even when offline. Note that, depending on the date since the game’s release date, not all content may be available to begin with – more content is added on certain dates decided by Nintendo (as of 2nd September 2010, Japanese players have access to all available downloadable content).

Notes: Each item can only be assigned once per save file. Aside from this limitation, they can be assigned an infinite amount of times.

Increases HP growth rate by 20% and all other growth rates by 10%. Useful for characters who join at low Levels.

Increases the support bonus from all support partners to the maximum available rank. Also unlocks all the character’s base conversations with most characters, except in the case of My Unit, where it only affects Marth, Ryan, Luke, Rody and Katarina.

For example, if Catria consumes this item, her support bonus from Marth, My Unit, Minerva and Palla will be instantly raised to A, while her support bonus from Cain will be raised to B. The base conversations Catria and Chris 1-3, Minerva and Catria 1-3, Palla and Catria 1-3 can also be viewed instantly, but for some reason Catria and Est 1-3 cannot be viewed.

Increases Str, Skl, Spd, Lck, Def and Res by 2 for one chapter. Does not surpass stat caps and does not stack with other consumable temporary stat boosters. Generously has 77 uses.

Notes: Additional details will be added to the Chapter data pages.

These chapters take place chronologically between Shadow Dragon and New Mystery of the Emblem. Like the BS Fire Emblem chapters, they are not affected by nor do they affect the main story.

Magic city Khadein… This land once dominated by Gharnef, the Dark Pontifex, was liberated by Marth during the War of Shadows. However the same couldn’t be said of the surrounding deserts, as it is rumoured that the Dark Pontifex’s mysterious rituals are still being held in some remaining ruins. Merric, a wind mage of Khadein, is ordered by his master, Wendell, to head out for the ruins…

Not long after the War of Shadows ended… With Medeus’s destruction, peace seemed to return to the world. However, the dark forces defeated by Prince Marth have begun to secretly act in the shadows… 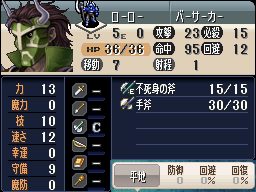 Following the War of Shadows… Princess Shiida of Talys was engaged to Prince Marth of Altea, and all of Talys rejoiced. However, taking advantage of this chance, a clan in the outskirts of Talys suddenly started a rebellion. Having taken only a few bodyguards with her, Princess Shiida was swept away from the city and into the battlefield, her whereabouts unknown… The leader of Talys’s hired swords, Ogma, commands his subordinates and immediately marches out to rescue Shiida.