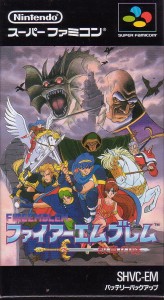 After Marth’s battle with Durhua ended, the people of Akaneia began to rebuild their devastated homelands. Hardin, the hero from Orleans, married Akaneia’s Princess Nina and restored Akaneia as a Holy Empire. One year later, as Marth’s wedding with his beloved Sheeda nears, the Empire orders Marth to vanquish the rebellious Grunian army. Marth, having sworn loyalty to the Empire, begins a new expedition, although he has doubts.

War is upon the continent of Akaneia once again, in this direct sequel to Dark Dragon and Sword of Light. The gameplay returned to that of the original, albeit with some slight differences and numerous improvements, thanks to the move to the superior Super Famicom hardware. This was also one of the longest games in the series, featuring two games in ones- the first was a remake of the Dark Dragon and Sword of Light story, while the second contained the new Mystery of the Emblem
story. 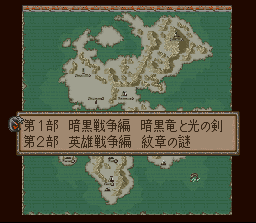 Choosing to start with Book 1 or Book 2

The game was split into two parts, usually referred to as Book 1 and Book 2. When beginning a new game, players could choose which of the two Books to start from. Book 2 was the actual new game, with Book 1 being a remake of the very first game, utilising the newly introduced mechanics from the sequel, although five chapters and five characters were removed. The remake was intended for new players, as the story
of the sequel followed directly from the original.

Certain characters with a special relationship, such as friendship, family or love, towards another character gain a support bonus when fighting near them. This bonus increased accuracy, avoid and critical rate.

A feature usually taken for granted nowadays. Before this game, there was no easy way to determine how far player or enemy characters could move, besides selecting them and trying to move to a particular position. However, from this game and onwards, both player and enemy movement ranges are shown just by
selecting the character. 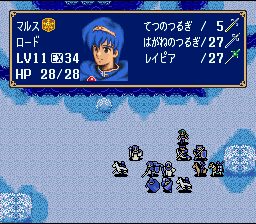 Mounted units (on horseback, dragon or pegasus) had the option to dismount and go on-foot, so they could navigate terrain better, move into buildings and avoid weapons effective against them. During indoor maps, mounted units were automatically dismounted.

These members of the declining dragon race existed in the original. This time, they use their dragonstones to transform on the map for a number of turns, instead of during battles only. Also, Chiki, one of the Mamkutes, could use a variety of dragonstones instead of just the usual one or two (although other dragonstones are only available secretly).