Chainy: A commando. This unit transforms into another of your units, copying stats (except HP). Recruit him with Marth. He can be a little useful some times but he isn’t very recommendable.

Alan: You can only get one of them. Both are average units that get surpassed by someone else of their classes. Oguma, Navarre and Raddy beat Samson, while Kain, Abel, Hardain and Roshe beat Alan.

Here are their stats, so you can make your decision: 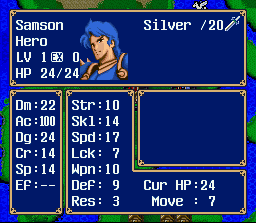 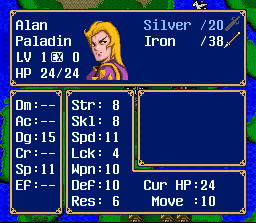 First, lure the 3 Dragon Knights with one of your strongest characters and finish them during the next turn with magic and arrows. 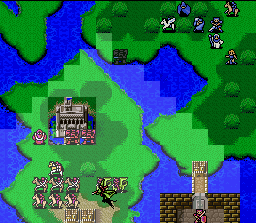 You have to save the villages, since there is a thief that will try to destroy them. Use your highest movement units for this task and recruit either Samson or Alan.

Now, as probably you have noticed, there is a small army coming towards you. Use the villages and the woods as cover and fight them defensively. 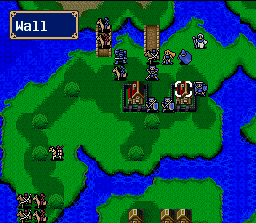 Leave four of your units covering the forts.

Keep advancing. Make any preparations in the shops and armories. Train in the arena if you wish.

Open the door of the eastern room and kill the heroes. Recruit Chainy with Marth.

The boss will fall easily against magic.