Est: A Pegasus Knight who comes underlevelled. However, she has the best growths and has the potential to be one of your best units. Use her if you have the patience to raise her. She can also do the triangle attack with Katua and Paola. She comes with the Miracle Sword, the most powerful sword in the game. Visit the village to recruit her.

Lawrence: A General who starts as an enemy. He has great defense and weapon level, but mediocre in everything else. Recruit him with Sheeda. 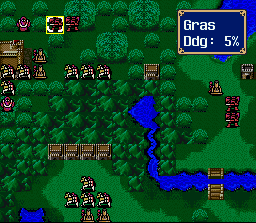 This chapter is difficult, mainly because of all the Paladins equipped with Silver lances and the boss. You will get 2 of the most powerful weapons of the game. As I mentioned above, Est comes with the Miracle Sword, and the boss, Camus, has the Gradius (a lance).

Have your strongest Pegasus Knight destroy the Ballista that is located at the left of your starting position. Make sure your unit can endure a hit from each general (2 hits in total), if your Pegasus Knights can’t endure them, send Minerva. During the next turn, have her flee to a safe location, with the rest of your party.

Lure the 4 Paladins that are at the west of your starting position. Once you kill them, save the village as fast as possible and destroy the 2 ballistae. Long movement units are recommended for this. 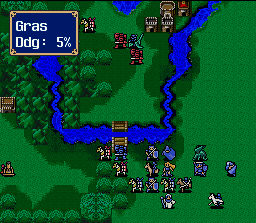 Once the Paladins are dead and you recruited Est, give the Miracle sword and the Star orb to your most powerful sword user (Oguma, Navarre or Raddy will probably be your best options). Why the Star orb? Because the weapons of the character holding it won’t lose uses. Fully heal your characters and repair the bridge with your thief.

Kill the 2 generals and keep advancing. Restock your supplies in the shops and fight in the arena if you wish.

Soon, there will be reinforcements (archers, armor knights, social knights and horsemen) coming from these forts: 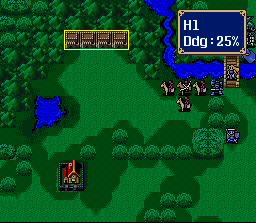 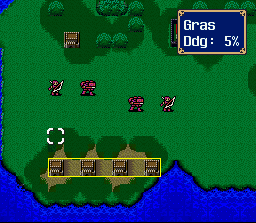 I recommend to leave a high defense character blocking the bridge while the rest of your group heads for the castle. If your unit’s defense is higher than the enemies’ attack, they won’t attack you.

Now it comes the difficult part. There are two ballistae, some Paladins and Lawrence with another General. Lure Lawrence and recruit him, get rid of the ballistae as fast as possible and then kill the Paladins (except Camus). Chiki as a Divine Dragon helps a lot here. Attack the Paladins from a distance, otherwise, you’ll be inside of Camus’ range.

Only Camus remains, and he is a fierce opponent, use the Miracle Sword to beat him.