Chapter 20: The Chosen Ones

Serenes Forest > Mystery of the Emblem > General > Walkthrough > Book 1: War of Darkness > Chapter 20: The Chosen Ones

No new characters in this chapter.

As you can see, your troops start divided in four groups. In the character selection screen, you can determine how they will be placed.

Take a look at these pictures. For multiple characters of certain classes I used some boxes so you can differentiate them: 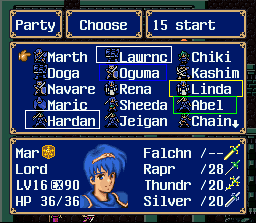 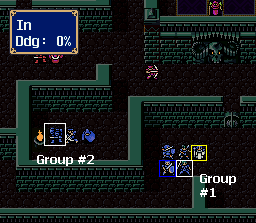 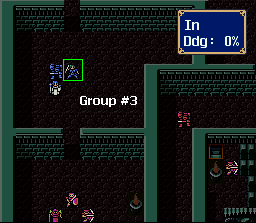 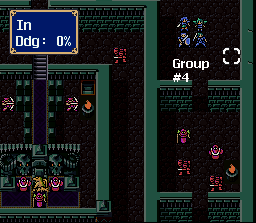 Now, I’ll teach you how to select your characters so they end in the position you want. Let’s assume your character selection screen looks like the first pic above.

Now let’s imagine you want Jeigan to occupy the second spot. You select him, then press B and re-enter the character selection screen. 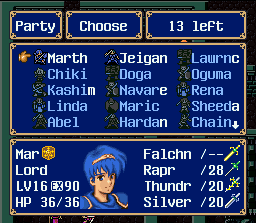 Repeat that for all the characters so can decide where they will be placed.

Your main strategy is to play defensively until your characters rejoin. It is highly suggested that you bring all kind of staves (reblow, restore and recover are very useful here).

If you check the above pictures you can see I labelled the groups. I made that because that will make the chapter’s strategy easier to explain.

Group #1: Move west, then north. Group 1’s objective is to rejoin with group 2 and group 3, then have Marth reach Medeus.

Group #2: During the first turn, lure the sniper, you’ll kill him in your second turn. Then play defensively until groups 1 and 3 can help. I recommend a high defense unit to be in this group.

Group #3: Lure the hero, then kill him in the second turn if he’s not dead. Then kill the sniper and mamkute and rejoin with group 1. Use someone who has a Dragon Killer sword and other strong melee attackers.

Group #4: Lure the magic user, then kill him in the second turn. Play defensively to lure the Generals and then kill the mamkute. Chiki or High defense/HP character are my recommendations here.

And that’s how it begins. Now they will start to attack you (especially Group#2). Remember to play defensively and use staves to heal.

Groups 1 and 3 should aid Group 2 as fast as you can. Meanwhile, Group 4 should try to rejoin too (be careful with the magic user who can use Meteor. He is at Medeus’ right side.)

When all your units are reunited, head north, towards Medeus’ room (hurry up, reinforcements will arrive.) There are 2 Snipers at the entrance, kill them with melee attacks. 2 Dragons should be there as well, use the Falchion or a Dragon Kiler sword.

Then, kill the Mamkute and the magic users that surround Medeus with ranged attacks. Don’t go melee, or you’ll end inside Medeus’ range. After that, have Marth and your Royal weapons users deal with Medeus. After attacking, use staves to cure.

Medeus should be dead in a couple turns. It is very easy to critical him since his luck is 0.

After you kill Medeus, seize the throne and congratulate yourself, as you beat Book 1!! You rock! ^_^ 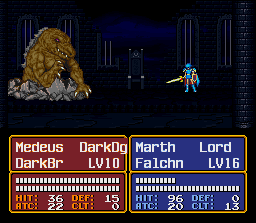