Hardain: He is the best Social Knight/Paladin in book 1. I highly recommend to use him along with Kain or Abel.

Roshe: He has balanced stats all around, but Kain or Abel may have better stats by now.

Villuck: His stat growths are very low, he won’t excel in any stat. Don’t use him.

Zaggaro: A pre-promoted horseman. He has good HP but the rest of his stats aren’t anything special. Don’t use him

Ulf: Another pre-promoted horseman. He has better stats than Zaggaro but still, he isn’t great. He is a little useful in maps where there are dragon knights. Still, if you want a horseman, use Kashim.

Marchis: A Social Knight who starts as an enemy. He only excels in weapon skill. To recruit him, have Rena speak with him. Not very recommendable 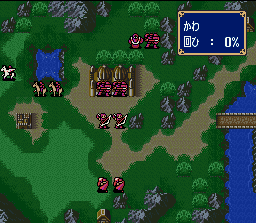 Out of the 2 enemy Social Knights, Marchis is the one in the right.

Maric: Your first mage and the only one who can use Excalibur. He has balanced stats. To recruit him, visit the northern village.

Have Hardain’s team move towards the path shown in the picture below: 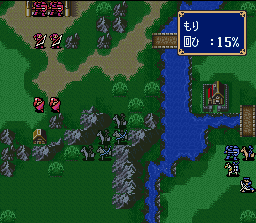 Meanwhile, have the rest of your army advance north, while trying to lure one of the Social Knights 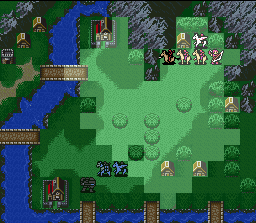 Now, if you want to recruit Marchis, stay out of his range and he won’t attack you. Move Hardain’s group near the bridge so they can rejoin with your main group. If you can, kill one or two enemies. Use the woods to increase your evasion. 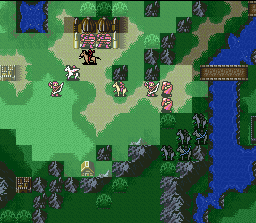 Meanwhile, kill the social knights, the pegasus knight and the archer that are near your main group. Make sure to visit the village with Marth. You’ll get a fire dragonstone, you will use it later.

In the next turn, kill the thieves, if you can’t reach them, move someone to the village’s gate so they can’t destroy it.

Hardain’s troops should use the forests so they don’t die easily. Kill the enemies that approach Hardain’s group while staying out of Marchis range. This may be difficult, so be patient.

Have Marth visit the remaining village to recruit Maric. Now, Lure Marchis, while having Rena near so she can speak with her brother. 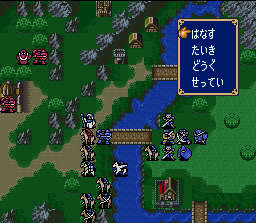 Buy some steel weapons in the armory and advance towards the castle. By now, there should remain only a few enemies, so it will be easy to kill them. The armor knights have high defense, but Marth’s rapier along with Maric’s magic can easily take care of them. The enemy priest will drop a Live Staff, give it to Rena.

The armor knight besides the boss will drop an Armour Killer, give it to Oguma or Navarre.

The boss is easy, you can use Marth with the Rapier, Maric or someone with the Armour Killer, but don’t attack him with a Social Knight, since he has a Knight Killer.

Once the boss is dead, give the Knight Killer to Doga and seize the throne.