If you didn’t have a chance to give your characters the weapons you bought last chapter you can do it now at the battle preparations screen. Also, for now, Alan should have Doga’s Steel Lance and a vulnerary. Give someone else Alan’s Silver lance so you can give it to Katua once the chapter begins.

The order in which your units will appear in the map is the following:

I suggest locating Doga at spot 8 and Alan at 4.The rest doesn’t matter much.

At the first turn, the two dragon knights besides the boss will move to the forts.

The reason why you should put Alan at spot 4 is that he is going to pursue the thief with the lady sword. Alan is able to reach the thief at turn 2, but he would be inside the boss’ range (yes, he moves) so it’s safer to kill the thief at turn 3. However, you’ll be inside the range of a dragon knight, so that’s why you give Alan a vulnerary. After getting the Lady Sword he should regroup with the rest of your party.

The rest of your party should head north at the beginning. At turn 2, after the enemies started moving, the hunters will be inside your range. Have Katua recruit Warren and kill the other two. Warren’s initial location is in the picture below, at the square at the right of the cursor:

Be careful of staying outside of the boss’ range while killing the rest of the enemies. Make use of terrain and long range weapons as much as possible. 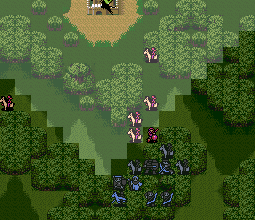 Now it’s time to face the stronger enemies. Lure the boss with Katua (Silver Lance) and during your turn attack him with your archers and Katua. The left dragon knight should be heading towards your party as well, since Alan lured him before, but he is weaker and already damaged. After that, the third dragon knight (and the last enemy remaining) should be no problem.

Overall, this is not a hard chapter. It’s just a matter of taking things with calm and using terrain. There are no reinforcements, so there is no need to rush.