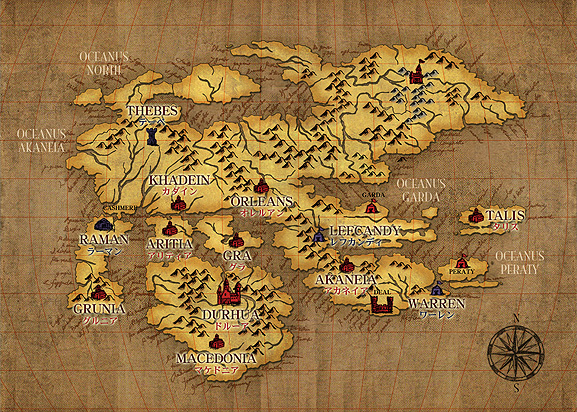 A rich kingdom built upon lush greenery and water. After slaying Mediuth with the divine Falchion sword, the hero Anri founded this land. Ever since, the successors of Anri’s bloodline have been the rulers, passing down the Falchion to the next generations. Aritia is also home to an elite knights squadron.

A newly established island country surrounded by the azure seas.
Talis is a small nation, located to the far east of Akaneia,
without even its own knights. Not long ago, there was a tribal conflict, which was resolved with the unification of the island and the kingdom’s formation.

A vast kingdom amongst the north eastern plains. 100 years ago,
King Cartas of Akaneia, declared his younger brother, Count Marlon to be its king. Since its formation, the country has always shared close ties with the Holy Kingdom of Akaneia.

The glorious leader and protector of the continent. Akaneia is the oldest country in the continent, formed from the unification of many smaller countries. Its first king conquered the entire continent,
but in recent years many of its countries have gone independent.
However it is still respected as the suzerain state.

A sad land, wrecked by fate. After Anri, the first king of Aritia,
passed away, there was a division amongst the populace and eventually part of Aritia left to become independent, and so Gra was formed.
Since the time of its formation, Gra had always been allied to Aritia.

A proud and mighty sanctuary of sorcery amidst the desert. Long ago,
a great sage taught his life’s teachings to people. Eventually,
from his teachings, this free-governing city was born, ruled by its archbishop and countless high priests.

After the liberation wars ended 100 years ago, the garrison leader General Ohdwin formed this knights country. Backed up by its powerful Black Knights and military might, Grunia subdued the neighbouring tribes and became one of the strongest countries in the continent.

The land of wyverns and pegasi. Long ago, during the Durhua Empire’s reign, this land was were slaves were sent to. After Durhua’s fall, the slaves formed their own country and named Iote, a hero who fought to liberate the slaves, their first king. Afterwards, Macedonia was feared for its mighty Dragon Knights.

The empire built by the dragonkind that despised humans. Durhua was formed by the king of the Earth Dragons, Mediuth. At one time it conquered the entire continent of Akaneia, but it fell as soon as Mediuth was slayed by Anri. However, 100 years later…