Three years have passed since Crimea fought Daein in the Mad King’s War and both countries are still in the middle of rebuilding. However at Daein, the citizens are oppressed by the Begnion occupational army and live their lives in despair. Micaiah, a mysterious silver-haired girl and member of the Dawn Brigade, appears to help the Daein citizens. She is considered a saviour by the citizens, and eventually goes on to liberate Daein and return power to the royal family, which was thought to be destroyed. However Micaiah’s tale is only the beginning of a great war that is set to engulf the whole continent.

Path of Radiance left off with many mysteries, such as what Ike’s next trial would be and the identity of the Black Knight. However, Radiant Dawn, which is a direct sequel, is set to resolve them all and provide an enjoyable strategy RPG experience at the same time. Although developed for the Wii, no Wii-specific features are implemented, but this means that Fire Emblem has kept straight to its roots.

The storyline and setting of Path of Radiance is continued in this game, as a new war threatens the continent of Tellius. As such, don’t be surprised to see a couple of old faces, although there are plenty of new ones as well. Like all good sequels, no knowledge of the previous game is required, but any knowledge is a bonus. If you own a copy of Path of Radiance though, there are a few bonuses that you can obtain via the Data Transfer.

The gameplay hasn’t changed radically since Path of Radiance, but there are plenty of minor changes and improvements. The chapter count has risen to 43, making this the longest Fire Emblem game yet. New factors, such as height, help to spice up the gameplay. The graphics, such as those of the character models, have been improved, and the battle animations are much smoother. The game also runs at a slightly faster pace compared to previously.

Cleared Path of Radiance save data, stored on a GameCube memory card, can used to award a fixed stat boost to returning characters, as well as raise their weapon levels. Also Support conversations, unlocked in Path of Radiance, can viewed in a Support library, which is helpful as a Support viewer was missing in the previous game. 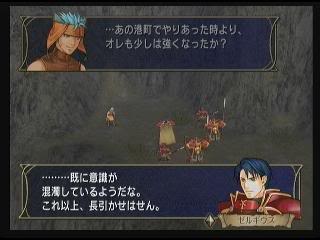 The game is split into four compulsory parts, with each part telling a different part of the story. Each part contains different characters, although they all eventually meet up during Parts 3 and 4. The game doesn’t feel too fragmented, and the splitting can be beneficial, allowing for different characters, plots, and perspectives to be seen.

2nd stage promotions, last seen in Gaiden, feature. Some characters, mostly those in Part 1, are able to promote twice. For example, Edward can promote from a Myrmidon to a Swordmaster, and then from a Swordmaster to a Trueblade. Other characters already start promoted, but they can promote again. Both promotions occur automatically, or with a special item, like in Path of Radiance. On promoting to the highest class, the character automatically obtains their Mastery (AKA Occult) Skill.

The Laguz have returned, but they function slightly differently. When Laguz transform into animal form, their major stats are multiplied by 2 instead of increasing by a fixed amount. More importantly, Laguz are now able to reach a maximum Level of 40. Also, when a Laguz reaches Level 30 or above, they can learn their Mastery Skill using a rare Satori Sign item. 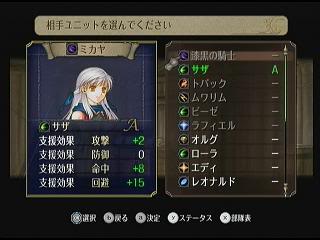 The Support system has been revamped, for better and, perhaps, for worse. All characters can potentially support with one another, although characters can only support one character at a time. Supports can also be deleted, which is handy if you change your mind or find a better partner. However a sacrifice has occured in the form of the Support conversations. All Support conversations now consist of one or two lines per character, and are very impersonal.

Dark magic has retuned, after being absent from the previous game. The magic trinity of Path of Radiance remains, but is now backed up by the GBA magic trinity of: Light beats Dark, Dark beats Anima, and Anima beats Light. Knives and Laguz weapons, called Strikes, also have weapon ranks. Laguz cannot swap Strike weapons, but they can increase their weapon’s power and accuracy through continual usage.

A feature that doesn’t have much impact on the gameplay, but is cool and amusing nonetheless. At certain points in the game, due to the story’s progression, two different player armies come face to face as enemies. At these points, the player will control one army and fight against characters of the other army, which is controlled by the computer. If any playable characters, as enemies, are defeated they will still return later. Having Ike fight Sothe, for example, is now a possibility!