Multiplayer battles are split between Wireless and Wi-Fi battles, although they both function the same. Only two players can do battle at the same time, and both players must own a copy of the game. For Wi-Fi battles, you can choose to either battle your friends (using friend codes) or random opponents. For those interested, Voice Chat is enabled for friend-code battles. 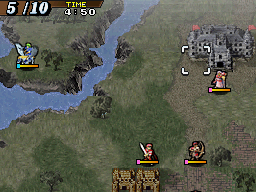 To begin with, players form 5-character parties using characters they raised in the main campaign.

After each player has chosen which party to use, the hosting player sets the rules for battle, which are as follows:

Once the rules are set, the battle begins.

Upon winning a multiplayer battle (practice battles against the computer don’t count), you will be awarded a Card. These Cards have various effects attached to them, and one Card can be attached to a multiplayer party before battling.

Just some notes that players may find useful.