Another New Power Banner is now available in Fire Emblem Heroes! If you’re so inclined, you can spend some Orbs to summon 5★ Faye, Lukas, Stahl, or Sully. 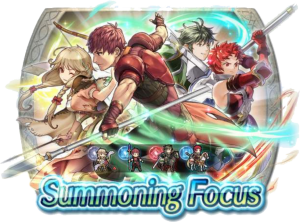 All four of these heroes received new unique weapons in the recent 3.5 version update. Click here to see the update article and read details about the new weapons.

This New Power Banner will be available until 26 May.

Additionally, Heroes has recently patched the game to Version 3.5.1 to fix the recent Aether Raids bug. As compensation for the bug, all players are receiving 10 Orbs and 100 Heroic Grails! You can grab them from Feh next time you log in. The game should prompt you to download the update immediately, or you can grab it from your device’s app store.

It’s time for another GHB Revival in Fire Emblem Heroes! Build up your strongest team to take down the Mad Dog once again in Grand Hero Battle Revival: Linus. 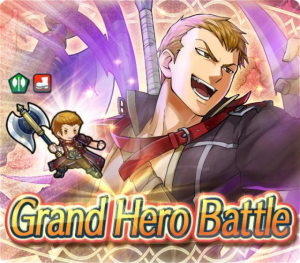 If you weren’t able to beat all of Linus’s maps back in June, now is the perfect time to try again. Even if you have, you can still earn four Orbs and another 3★ version of Linus by completing the maps under certain conditions. Check out full details in the Quests screen.

Grand Hero Battle Revival: Linus will be around for about a week, ending on 27 December. Best of luck completing the maps and the missions!

Additionally, Heroes has now updated to Version 3.0.1. This is a very minor update introduced solely to fix the Aether Raids Rematch issue. To apologize for the error, the game will also be giving out 5 Orbs to all players with tomorrow’s reset.

Prepare yourselves! As Tempest Trials+ winds down in Fire Emblem Heroes, a new event begins! Assemble your strongest brigades and take part in the 4th Grand Conquests.

Like previous Grand Conquests, participating players will be placed in one of three possible teams throughout numerous Outrealms. Vie for territory against the other two teams; the more areas your team owns at the end of the round, the more Arena Medals and Hero Feathers you earn! The location for the battles this time is the continent of Valentia. 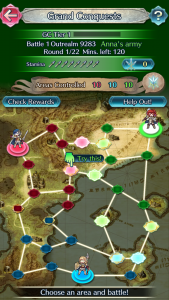 Remember, quests for each round offer a variety of rewards, so be sure to complete them! Advancing your GC Tier will also net you Orbs, Badges, Refining Stones, and Sacred Coins, making it well worth your while to participate.

Each round will last two days, with a total of three rounds. The final round of Grand Conquests will conclude Sunday, 1 July.

On another note, Version 2.6.1 has started rolling out today. This revision fixes a bug with Infantry Rush affecting enemy units. To apologize for any inconvenience, compensation Orbs will be provided starting 28 June.