END_OF_DOCUMENT_TOKEN_TO_BE_REPLACED

The Game Awards 2019 nominations are up, Three Houses nominated for Best Strategy Game

Moments ago, The Game Awards posted up their Nominations video for their 2019 ceremony, and Fire Emblem is in there! We’re in for Super Smash Bros. Ultimate as a universal inclusion (I totally count Smash Bros as an FE game), but we did see Three Houses directly nominated, too!

See the rest of the nominations and categories in their Nominee Announcement video, posted above.

Vote at https://thegameawards.com/, or by Google searching “TGA Vote” (or just click this link here), and watch on December 12 at 8:30p ET to see if any Fire Emblem representation brings it home!

Three Houses: 2019-02-13 Nintendo Direct will bring more info about the next Fire Emblem

It’s been officially revealed that the next Nintendo Direct – which will air on the 13th of February, 10:00pm UTC/GMT (2:00pm PT, 5:00pm ET, 11:00pm CET) – will feature new information regarding the upcoming Nintendo Switch title: Fire Emblem: Three Houses.

As you may see by the title card for the video, the live broadcast is due to be “roughly 35 minutes” long, and they also made a point of mentioning that new Three Houses details will be revealed, which probably means that it will be the main focus of this Direct.

Or they wanted to put us fans at ease and/or hype us up since we haven’t heard anything for such a long time. Be sure to tune in!

If you’ve been keeping up with E3 over the past years, you’ll know that it’s one of the biggest tech conventions out there. Nintendo annually attends E3 and puts on a pretty huge presentation, dropping teasers and highlights of games and merchandise that’ll hit shelves for either the same day, or within the year.

This year is no different, as Nintendo highlighted quite a bit this year in terms of gaming. We’re interested in how Fire Emblem fits into their grand scheme, and with Fire Emblem previously announced for the Switch, plus the presence of the Super Smash Bros invitational, you can bet that there’s at least some news in there for Fire Emblem fans.

Fire Emblem Three Houses comes out, looking downright incredible, with lightning fast load times, brigade based tiles, quite a bit of overworld exploration on foot, squad based controls, and an art style familiar to fans of the Fire Emblem Echoes Shadows of Valentia series. 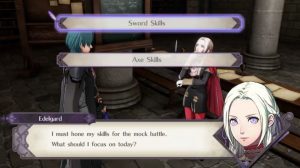 With dialogue choices impacting your future, there’s quite a bit to consider for the future, and with almost one more year of wait time ahead of us, it’s time to start your speculation. We’ll have a separate post breaking down Fire Emblem Three Houses in full, so keep your eyes open for that. 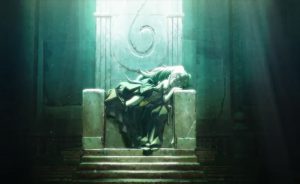 We’ve got quite a wait ahead of us though, as it was announced for Spring 2019.

That’s not all to look forward to, however.

Super Smash Bros returns to the switch, as expected, as Super Smash Bros Ultimate, and brings with it classic fan favorites, like Mario and Lukas, well missed but returning hits like Snake and Pichu, as well as Fire Emblem staples such as Marth and Ike. To quote the devs, they’re all back. Interestingly, while Corrin and Robins were also present, Lucina’s presence indicated herself with a 21 E for her appearance placement, while many other characters didn’t have anything specially displayed. Don’t worry, they cover it.

The twist to this game, is that like in the N64 days, you start with a small roster (8 playables), and constantly unlock new characters as you proceed through the game. 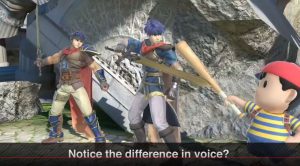 Neat inclusions include confirmation on Ike having palettes for both his Path of Radiance version, as well as his Radiant Dawn version, both of which are voiced slightly differently. 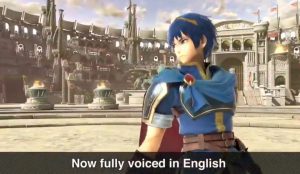 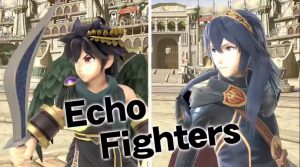 The Epsilon character indicates Echo Fighters, which are characters built in such a way that they’re more recognizable as similar but not identical to other character, characters. 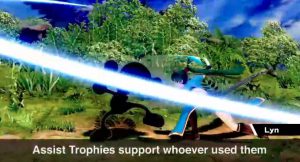 Lyn remains as an Assist Trophy, but a slight modification makes it so that defeating Assist Trophy characters nets you a point in point based matches.

Lastly, we see other staples of things expected, such as inclusion of all stages previously seen, GameCube controller, enhanced amiibo compatibility, before the tease of new playable character Ridley from the Metroid franchise, all of which can be experienced first hand on December 7, 2018.