Today, we have further details of the upcoming Version 5.5.0 update for Fire Emblem Heroes, which is planned to release around 6th May 2021, at 11 pm 7 am UTC.

Some of the features were already discussed in the Golden Week Feh Channel, but there’s also some new stuff.

Manage Groups: Lets you freely move your Heroes between your main barracks and all 10 reserve barracks. Again, you can select up to 10 Heroes at once.

Heroes sent to reserve barracks will unequip their Sacred Seals, Accessories and Pair Up partners. Also, they will lose their Summoner Support (although the wording is unclear if this is temporary or permanent).

END_OF_DOCUMENT_TOKEN_TO_BE_REPLACED

To start off the week, we have a few minor notices for Fire Emblem Heroes players. 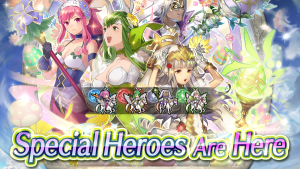 Firstly, the Regal Rabbits banner from 2019 is being re-run until 6th April 2020. To refresh your memory, the special heroes in bunny costumes are: Marisa, Palla, Bruno and Veronica.

Also, in case you missed it, there’s currently a Heroes with Aerobatics banner, which lasts until 27th March 2020. This is a good chance to score some high-flying heroes–namely Valentian Catria, Petra and Pegasus Nino.

After the day’s earlier preview trailer, we weren’t expecting much else new with Heroes today. However, the game decided to drop down the Version 2.6 Update Notification! Read on below for more details of what we can expect for the next update in early June.

The Version 2.6 Update will bring a lot of new things to the game. Some of the bigger changes include an expanded Allies menu, changes to Arena Assault scoring, and the addition of Accessories! The update also brings some expected enhancements, such as further additions to the Weapon Refinery, and more smaller changes as well.

Once again, Heroes will have a maintenance period before the update goes live. It’s scheduled to begin at 10:00pm UTC on Thursday, 7 June. The update download will go live as soon as maintenance is over.

Additionally, the upcoming Voting Gauntlet: Heroes & Legends has been formally revealed! It features the four free Heroes original characters duking it out against four legendary heroes. Check out the bracket below: 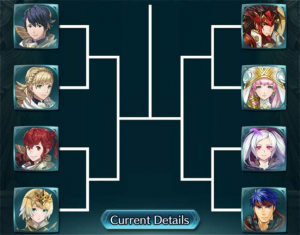 The Voting Gauntlet begins this Friday, 1 June, and will last through the 7th. A special Log-In Bonus to celebrate the upcoming event also began today. Since the five summonable heroes in this Gauntlet are only available via Legendary Hero summoning events, we may not get a separate Voting Gauntlet banner. May the best hero win!

END_OF_DOCUMENT_TOKEN_TO_BE_REPLACED

A new update is on its way to Fire Emblem Heroes! Check out the Version 2.5 Update Notification when you next log into the game.

The Version 2.5 Update will bring a lot of things to Heroes, some expected and some brand new. We’ll be getting some more Weapon Refinery options, and also some UI enhancements. One such enhancement is something many players have wanted for a while: an option to turn off Enemy Phase music!

Many of the unexpected changes fall into two categories: major Arena changes and an overhaul of the starting game Tutorial. Due to the Tutorial changes, all existing players will also receive a gift package.

Scroll on below for a deeper look at what the upcoming Version 2.5 changes will entail.

There will be a Maintenance Period starting on 8 May at 11:00pm UTC.. The update will go live as soon as the maintenance is over on 8~9 May. Additionally, because of the detailed Arena changes, the Arena will be closed all day on Tuesday and the next season will begin on Wednesday instead. This also applies to Arena Assault.

Additionally, the special Golden Week edition of Grand Conquests starts today! Make sure to read up on the changes from last event, such as the Rank Cap increase, and jump in when you’re ready. You can also already see the Grand Conquest Quests in the Quests and Missions page, including 3★ and 4★ Kaze: Easygoing Ninja.

Grand Conquests officially begins in a couple hours at 10:00am UTC. It will last for about a week, ending on 8 May.