The Fire Emblem Heroes team is continuing the Book II hype with another special video, this time featuring Fjorm singing her heart out.

“Flower of Ice” is performed by Cristina Vee Valenzuela, with English lyrics by Christian Nutt and original Japanese lyrics by Saori Kodama. Conveniently, there are multiple translations available via the captions.

If you’re curious, there’s also a Japanese version of the music video, with Chinese subtitles.

Unless I’ve misremembered, this is the first time we’ve seen Anna’s high-resolution 3D model as well.

Over the years, the Fire Emblem series has produced some amazing music–and it seems Nintendo is quite proud of this, because they’ve uploaded a music compilation on YouTube highlighting some of the greats.

The video features 43 tracks that appear in Fire Emblem Heroes, for a run time of 105 minutes. There’s a song from every mainline game, although Shadow Dragon (NES and DS versions) and Gaiden have been assimilated into their sequels/remakes.

There are also timestamps in the description for each individual track, if you’re looking for something specific. Of note, this appears to be the first time we’ve seen official names for some of these songs. Such as “Howling Gears” for the Book V map theme.

END_OF_DOCUMENT_TOKEN_TO_BE_REPLACED

Intelligent Systems has updated the Fire Emblem Expo II website with some additional details. If you missed the expo’s announcement, we covered it in an earlier article. The main thing to know is that the expo will be held on 5th and 6th May in Japan. 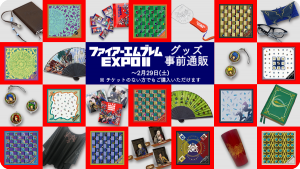 Firstly, a number of music samples have been added, for the songs that will play during the live concert. Some of these songs will be included in the upcoming Fire Emblem Premium Arrange II soundtrack, releasing on 19th February.

To listen to the samples, scroll down towards the middle of the Stage section, then press the “play” buttons. Or use our playlist below:

Next, the Merchandise section has been updated with all the glorious things you can purchase at the expo. To make things easier, there are two ways to purchase. One, you can order the items online prior to the event. Two, you can buy them in person during the event.

Online orders will be accepted between now and 29th February, via Intelligent System’s online store. Everything that can be purchased from the expo can be ordered online, with the exception of food items. Items can only be shipped within Japan.

Please continue for the goods!

END_OF_DOCUMENT_TOKEN_TO_BE_REPLACED

Not to be outdone by Nintendo Japan sharing the longer version of Three Houses‘s main theme song, the Western Nintendo branches just released their version with English lyrics.

Nintendo of Europe mentions that this song will be available in the Sound Selection USB that comes with their limited edition. Considering it’s also available in Japan’s soundtrack CD, it’s nigh guaranteed to be included in the North American soundtrack too.

If you’re interested, some of our forum members–Michelaar, Enduin and SageOfAnys–all worked independently to try and transcribe the lyrics. You can compare them with the translated Japanese lyrics as well.