A new Mythic Hero is swooping her way into Fire Emblem Heroes! Say hello to Altina: Dawn’s Trueblade! Altina is a hero from the past of Tellius, eventually going on to form the country of Begnion. Check out here introductory trailer below. You can also hit the “Read More” button below for a text breakdown of her skills.

Of course, many other awesome heroes will also be joining Altina in this new banner. Here’s the full list:

Additionally, the Grand Hero Battle for Haar: Black Tempest also makes a return to Heroes! If you didn’t beat him before, now’s the time. Both newcomers and veterans can also complete special quests to earn more Orbs an an extra copy of Haar. 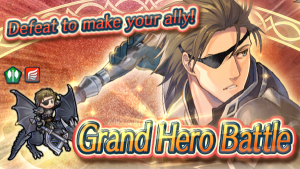 Haar’s GHB Revival will be around for about a week, ending on 4 December.

END_OF_DOCUMENT_TOKEN_TO_BE_REPLACED

Heroes: Thrasir: Omnicidal Witch as the next Anima Mythic Hero

In another chapter of How to Catch Elieson Off-Guard, Heroes throws something out that I certainly wasn’t expecting, in their latest teaser video for the upcoming Mythic Hero. This time, it’s none other than Thrasir: Omnicidal Witch.

Thrasir joins the Green Tome Infantry roster, as an Anima-blessed Hero, boosting the Defense stat. She comes with a pretty interesting weapon, a unique personal B-skill that has acts like a conditional Forseti with stat buffs, and a new inheritable C-skill, Panic Smoke 3, which is a -Smoke skill that inflicts Panic on nearby foes based on the foe you attack, and the foe you attack, which is atypical of -Smoke skills. Oh yea, the attack animation is pretty awesome to have on our side.

Standard of Mythic Hero banners, will feature a slew of 8% focused units to be summoned, three per color. Joining Thrasir will include:

END_OF_DOCUMENT_TOKEN_TO_BE_REPLACED

If you read the sneak peek leak of the upcoming Mythic Hero (thanks, Intern-kun), well, she’s been confirmed, in the trailer drop just hours ago, for Julia: Crusader of Light.

Her trailer indicates that she’ll be available from August 28 until September 4.

She’ll be a Blue Tome Infantry, with the Pair Up perk, and a whole set of announced skills. What’s most exciting about this, is that Julia is one of the only alts from the Judgral era, and specifically, the first alt from Genealogy of the Holy War. What’s more, is that her Earth blessing grants the Duel bonus, allowing score in the 180 BST threshold. That’s pretty big for arena-goers, having a power mage + dragonslayer that scores up in the tops of tiers.

For details on her skills and today’s new Special Quests, click Read More.

END_OF_DOCUMENT_TOKEN_TO_BE_REPLACED

If you’ve paid any attention at all to Fire Emblem Three Houses, you’ll likely be aware of the eponymous girl on the throne that appeared in many trailers, as well as in the game itself. Forgive the spoilers, but that girl just so happens to be Sothis: Girl on the Throne, aka the next Mythic Hero joining the fray.

Sothis comes in as a red Resistance-blessed Dark Mythic Hero, and with her, an interesting batch of new skills. Given how [F]Byleth’s Ruptured Sky special was inheritable, it’s entirely possible that her new special, Sirius, is inheritable as well. This pairs nicely with what appears to be a very speedy build, as it scales damage off of speed, and has a lightning fast cooldown of 2.

Sothis of course brings friends with her, as this is a Mythic Hero Banner, and includes its standard 8% limited summoning condition on all included. The batch this time features:

Finally, Sothis drops on July 31 (the day after tomorrow) and runs for one week, until August 6. Good luck, Summoners!

Edit – Listed Sothis as a Defense-boosting Anima hero. She is a Resistance-boosting Dark bless hero.