Heroes: The Phantom Thieves from “Risk and Reward” Reveal Their Cards

During the August 2022 Feh Channel, we were introduced to the theme of the next Special Heroes, arriving on 9th August. Today, we have additional details, including their skills.

The Heroes that will appear in the “Risk and Reward” banner are Cath (Binding Blade), Leila (Blazing Sword), Sothe (Radiant Dawn) and Duo Nina with Kagero (Fates).

In addition, Rickard will be available from the Tempest Trials+ event, which begins at the same time. He’s a Red Sword Flier with the following skills:

Furthermore, you can obtain the Atk/Res Ideal 1 and Dist. Counter (Dragon) Sacred Seals.

END_OF_DOCUMENT_TOKEN_TO_BE_REPLACED

If you’re keeping your eyes open on the next set of incoming Heroes units, and you’re a fan of Fire Emblem Fates, you’ll be pleased to see that the next batch of summonable Heroes is coming soon, from right within those means. 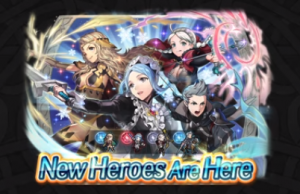 Nohrian Dusk brings to us several new units, including children of Leo’s retainers (Odin and Niles) Ophelia and Nina, as well as other popular Fates characters Silas and Flora. Get ready for some new skills, because we’re getting quite a few brand new ones.

Flora was slightly teased if you are an Android user and were able to spot her in the app awards list, but it definitely wasn’t an easy find for most.

Of course, with the new units, comes a new Story Chapter series, A Way Home, giving Summoners plenty of new chances to score orbs, should they wish to use them on this group of Heroes, or save them for a later occasion. They will both be available as of September 14 at 12a PT. Viewers who’d like to watch the Japanese version of the Trailer, click here.

To top it all off, next Grand Hero Battle has been announced, featuring Garon: King of Nohr. This will kick off on September 20, so prepare yourselves, Summoners.

For full details on the incoming units, click Read More.