In Fire Emblem Heroes, the summer season is upon us! This time, the summer banner didn’t leak, but it seems something else leaked instead…

The featured Heroes are all royalty from Radiant Dawn and Three Houses: Dimitri, Micaiah, Claude and Harmonic Edelgard and Altina.

In addition, Elincia: Seaside Queen will be a Tempest Trials reward. She’ll be a Blue Bow Flier. Other rewards include the Atk/Def Catch 1 and Inf. Hexblade 1 Sacred Seals.

END_OF_DOCUMENT_TOKEN_TO_BE_REPLACED

Heroes: Archaneans and Fairies Team Up for “Summer’s Dream”!

Slightly later than planned, the trailer for the second summer Special Heroes is now here! “Summer’s Dream” will be available between 7th July and 7th August 2021 (UTC).

Yesterday’s silhouette teaser was really obvious for a change–Freyja is the poster girl of the trailer, while Norne will be given as a Tempest Trials reward.

As for the other Heroes, you can look forward to the debut of Freyr, Ogma as the 4 and 5-star focus Hero, plus Harmonized Caeda and Plumeria (gosh, what will Marth think of this?).

Please continue for a breakdown of the new Heroes from the trailer!

END_OF_DOCUMENT_TOKEN_TO_BE_REPLACED

Students and their teacher from Three Houses are looking to make summer memories in Fire Emblem Heroes, in the upcoming “Overseas Memories” summoning event.

This time around, the silhouettes–if you saw them via the in-game notification–were fairly easy to guess. The Heroes that can be summoned between 8th July and 8th August (UTC) are Summer versions of: Ingrid, Dorothea, Sylvain and Duo Byleth (with Rhea).

Also, Sylvain can be summoned as a 4-star Focus Hero. Additionally, a Summer version of Lorenz can be obtained in the next Tempest Trials+ event. Of note, with the exception of Byleth, this is the first time any of the characters have appeared in Heroes.

For a text breakdown of the Heroes’ skills and whatnot, please continue on!

END_OF_DOCUMENT_TOKEN_TO_BE_REPLACED 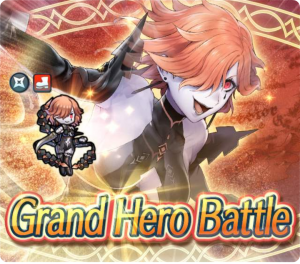 Kronya is an infantry dagger unit wielding the special weapon Athame. It has a unique effect that gives it a Vantage-like skill based on her foe’s HP. She also comes with Luna, Desperation, and Distant Guard. Defeat her on all three maps to earn three copies of her and 2,000 Feathers! Here’s a look at the map and Kronya’s skills and stats on Lunatic. 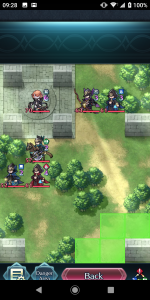 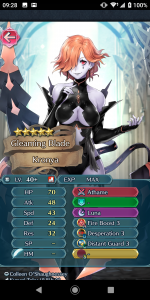 Additionally, three Summoning Focuses have just arrived! First up, we get special reruns of the older August Summer Banners. From Nohrian Summer, you can get swimsuit versions of F!Corrin, Xander, Elise, and Leo. A Sketchy Summer contains last year’s swimsuit versions of Takumi, Tiki, Linde, and Camilla. That’s a lot of cute swimsuits! 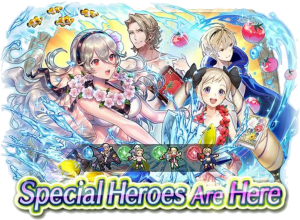 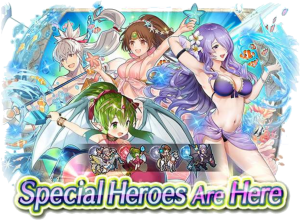 Furthermore, the next Daily Summoning Event banner is also available! This is a rerun of the older Countering Skills banner, and it contains Hector, Takumi, and Ike. Like all daily banners, it’ll only be available for 24 hours, so summon soon if you want these units! 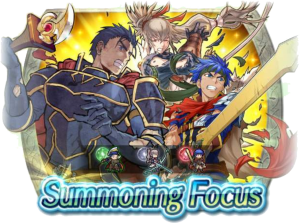