As promised during the recent Summer Feh Channel, the trailer for this year’s pirate-themed Special Heroes has landed! “Perilous Seas” will be active between 5th August and 5th September 2021 (UTC).

The featured Heroes include Surtr, Naesala, Vika and Duo Hinoka and Camilla. Following Freyja’s seasonal debut, I was curious who the next seasonal villain would be (would Halloween Hel be too obvious?). Also, it’s nice to have Naesala to pair with last year’s pirate Tibarn.

Speaking of Naesala, the Raven King comes with the new Stall Ploy skill, which restricts the movement of foes with an extra movement buff. This should make it easier to handle threats such as Legendary Sigurd.

Besides those four, Lifis: Terror of Iz can be obtained from the upcoming “Ice & Flame 2” Tempest Trials event, alongside the Spur Atk/Def 1 and Steady Breath Sacred Seals.

Lifis himself also comes with the Helmsman Axe+ (Atk/Spd/Def/Res -4 to foe during combat), Swap, Wind Boost 3 and Windsweep 3.

END_OF_DOCUMENT_TOKEN_TO_BE_REPLACED

It’s August, which means that we’re getting one of the bigger Feh Channels of the year!

Feh’s Summer Celebration was announced first, sharing a slurry of celebratory gifts that will be coming as early as tomorrow.

Here are all the details of the event and the rewards, including the times (referencing 12a PT for the starting date – 11:59p PT for the end date as per usual), and the cumulative rewards total obtainable throughout each duration.

Next up, include details on the upcoming Special Event heroes for the upcoming Pirate Festival, showcasing characters from a variety of Fire Emblem worlds. Included in the banner are Naesala: Sea’s Shadow, a Red Beast Flier, Vika: Sea-Dark Wing, a Colorless Beast Flier, Surtr: Pirate of Red Sky, a Blue Lance Armor, Lifis: Terror of Iz, a Green Axe Infantry, and Duo Hero Hinoka: Fair Pirate Pair (plus Camilla), a Green Bow Flier. As per usual, a banner video will drop, and we’ll detail that out once it lands.

END_OF_DOCUMENT_TOKEN_TO_BE_REPLACED

While our schedule gave us a heads up that some new heroes were coming, I certainly didn’t expect this. Say hello to Ylgr, Surtr and Hrid, in the upcoming Fire and Ice banner.

Of course, a new Paralogue comes with it, bringing forth orb quests and thus, more chances to summon one of these literal polar opposites. What’s unique about these opposites is their batch of skills, of which a couple if interesting looking A skills look inheritable, not to mention their rather potent looking weaponry. What’s also interesting is that this is the first banner since launch to only feature two Heroes. 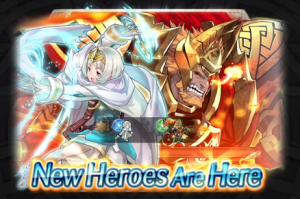 Fire and Ice, with its two Heroes and Paralogue chapters, kicks off on November 20 at 11p PT. Fans of the Japanese trailer can view it here.

For more info on their Skills, click Read More.

END_OF_DOCUMENT_TOKEN_TO_BE_REPLACED

Feh is back, and with quite a bit of news to enter the holiday season with. She covered quite a bit in her latest Feh Channel update, including new plot events, weapon forging, new character additions of fan favorites, and much much more.

If you were hoping to catch the latest Feh Channel update, but either missed it or just require a re-watch, well check it out!

For starters, Feh shares news about a Choose Your Legends update. They’ll be in the Farfetched Heroes banner, available tonight. We learn about the next bunch of four units earning credit as Choose Your Legends heroes, featuring Dorcas as the clear cut winner;