After the interview with Jeuxvideo, the developers of Three Houses were also interviewed by RPG Site and VG247. Given the timing, these probably happened around the time of Japan Expo in Paris.

The interviews are light on actual details about the game, but since we know a lot about the premise and core gameplay (plus they are unlikely to answer questions that are too specific), the developers were quizzed about more general things.

We’ll start with RPG Site’s interview. This one has some interesting questions about the inspirations for the game. 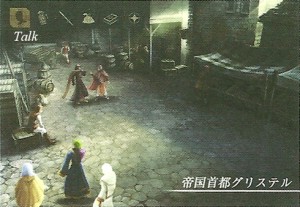 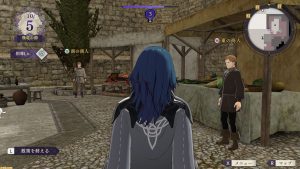 Left: A marketplace from the cancelled game. Right: The market in Three Houses.

The folks at RPG Site have really done their homework because they asked if Three Houses borrowed any inspiration from the cancelled Wii Fire Emblem game. In the cancelled game, players controlled multiple characters as one unit, a bit like the battalion system in Three Houses.

The developers said they didn’t directly borrow any ideas from that game, but they did say they often think about discarded ideas from throughout the series. Funnily enough, Kusakihara was the director of the ill-fated game and that’s where Yokota first met him.

Next, RPG Site asked if the game was influenced by Persona or Harry Potter (when considering the school setting). Actually, the game was based on the academy days of Sigurd, Quan and Eldigan from Genealogy of the Holy War. This was easy to guess, but it’s nice they acknowledged it.