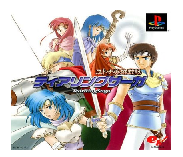 At the continent of Lieberia, Saint Utna formed the four Kingdoms of Reeve, Salia, Canaan and Leda. The continent enjoyed generations of peace until the Gerxel cult, followers of an ancient Evil God, appeared. King Bahanuke of Canaan fought the Gerxel Cult in a 20 year war, but in the end made peace with them. Afterwards, he united the countries surrounding Canaan and declared the restoration of the Zoa Empire. The newly formed Zoa Empire went forth to invade the territories of Lieberia and quickly subdued the Kingdom of Reeve. The story begins as Runan, son of Reeve’s Duke Cramd, and his friend Holmes, the son of Granada’s Vals, escape from the mainland and seek refuge at the island Kingdom of Welt.

After Thracia 776, Shouzou Kaga (the creator of the Fire Emblem series) left Intelligent Systems to form his own company, Tirnanog. There, he developed TearRing Saga (initially known as Emblem Saga), a strategy RPG game for the Playstation. Although not a true Fire Emblem game, this was one in everything but name, featuring almost identical gameplay and a familiar storyline and setting. Unlike the GBA iterations, the progression from Thracia 776 was more obvious, retaining recent additions such as special Skills for characters. The game also borrowed many gameplay elements from Fire Emblem: Gaiden.

Some features that were re-introduced included a traversable world map, the existence of monster enemies and a two army system. The two army system worked similarly to Fire Emblem: Gaiden, with the addition that at certain points in the game the armies would meet up and, during those points, players could swap characters and items between the two groups. Also, quite a few character classes in this game, such as Fighters (that wielded swords), Saints and Exorcists, originally appeared in Fire Emblem: Gaiden. 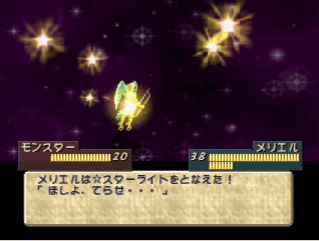 Casting the Starlight Spell against a monster

As well as being able to suspend the game during the middle of a battle, players could make a staff-using character cast a Save staff to create a permanent save. However, Save staves have a limited amount of uses and are quite rare.

The game featured an in-depth multiplayer mode long before Fire Emblem did (if Shadow Dragon‘s even qualifies as one). In this Versus mode, players could form groups of characters raised in the main campaign, and fight in a number of specially designed battle maps. 2 to 4 players could participate in this mode, and there were a variety of options that could be adjusted.