The game features a host of communication functions to keep players busy with the game.

Using a local connection, players can team up with a second player to fight computer-controlled opponents in a 2 vs 1 knock-out competition. Players choose 3 characters each and face off against a string of foes, one foe at a time. Each player takes turns as the main attacker and support character, with the support character providing assistance in the form of Dual Attacks or Dual Guards (see the Dual System for further details on this subject). Only 1 character per player participates in the battle, with the other characters remaining in standby until they’re switched in. 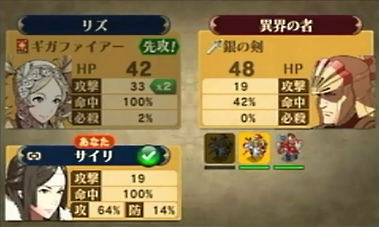 Players can select which enemy groups to fight, with the game handily informing you of the group’s difficulty level, leader and the item you can obtain upon defeating this group. The enemies in Dual Tag also include characters from the story, like Callum or Frederick. Additional enemy groups can be downloaded via SpotPass. In the above screenshot, Liz and Sairi are fighting an Other-worlder together. Sairi is being controlled by “you” and is acting as the support character. It seems this is the second opponent in the competition–the first enemy has been defeated and the third opponent is Frederick.

In the StreetPass mode, players can form special squads dubbed “My Team”, which contain a maximum of 10 units including My Unit. These squads can be sent to other players via StreetPass communication and it appears you can set up a greeting message and card for other players who encounter your squad. After passing another Awakening player, the other player’s squad may appear on the world map as a green unit. Players can purchase goods from this squad, recruit the other player’s My Unit to their squad or even challenge the squad in an optional battle. After meeting up with the squad, it will disappear from the map, but may reappear later. 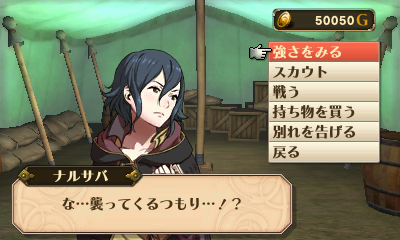 The image above shows the available commands when meeting up with another My Unit: View Abilities, Scout, Battle, Buy Goods, Dismiss and Return.

“Scout” allows you to hire the other player’s My Unit, the cost dependant on their stats. If you’ve lost many units in Classic mode, you may be able to make up for lost strength by scouting for other My Units. “Battle” obviously enters you into a battle with the other player’s squad, which is likely controlled by the computer. According to the help message in the game, the enemy’s squad is stronger on higher difficulty levels, so there could be some interesting matches to be had. If you manage to defeat the squad, you will be able to recruit the other player’s My Unit without paying any gold, as well as gain valuable experience for your characters.

Additionally, you can buy goods from this passing My Unit, including useful items such as the Levin Sword and not-so-useful ones like the Wooden Twig…

Through SpotPass, new sidequest maps, items, teams and Dual Tag opponents can be received. After receiving SpotPass data, a “Download Box” will appear within the game, containing options to download the new data. The downloaded teams will include characters from previous Fire Emblem games such as Ira from Genealogy of the Holy War, Innes from The Sacred Stones and Clea from Gaiden. According to Nintendo, a total of 120 teams (so 120 returning characters) will be made available, at a rate of around one a day. 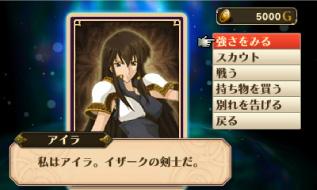 The SpotPass teams appear on the world map in a similar manner to the passing My Unit. In fact, the available commands when meeting up with a returning character are exactly the same as for another My Unit, so you can recruit returning characters by hiring them or defeating them in battle (Ira, you’re going down!). The goods they’re selling also include rare items like the Rexcalibur tome. With so much going on, you’d better not forget to take your 3DS and copy of the game out on the streets!

When connected to the Internet, players will be able to purchase and access the paid downloadable content (DLC), which includes new maps and new episodes, featuring characters from previous games in the series. According to Nintendo, the DLC is not required to complete the game, but is geared towards players who want a deeper experience. Generously, Nintendo is making the first batch of DLC available free to download for a limited time, between 19th April to 31st May (in Japan). 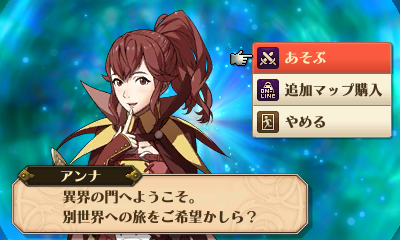 To access these features, it seems players must venture to a mysterious island to the far south of the world map, where an even more mysterious gate is located. Beyond this gate lies Anna, the keeper of this Other-world Gate and the player’s connection to other-worldly adventures. The available commands in the Other-world Gate are: Play (content), Buy DLC Maps and Stop.

Below is a list of the available DLC scenarios:

By the time you’ve reached the end of this page, you’ve probably noticed that there’s no mention of any multiplayer battles, like in the recent DS titles, involving two player squads fighting on battle maps. Currently Nintendo has not mentioned details of such a mode, if it even exists.