The world is ruled by the Divine Dragon Naga, who is kind to man, and the Evil Dragon Gimle, who dreams of man’s destruction.

After falling unconscious and losing your memory, you are rescued by Krom, prince of the Holy Kingdom of Iris and vigilante captain, and decide to accompany him and serve his vigilante force.

Inhuman corpse soldiers who appear along with natural disasters.

A mysterious swordsman carrying a second treasured blade that should not exist.

After many battles, you and the other vigilantes become caught up in a huge conflict that will decide the world’s future…

In the distant past, the Evil Dragon Gimle attempted to destroy the world. However, their actions were stopped by the Divine Dragon Naga, who bestowed man with the power to seal away Gimle. According to legends, Gimle took on the form of a gigantic dragon, while Naga took on the form of a human.

The story begins at the Continent of Iris, home to three mighty nations. 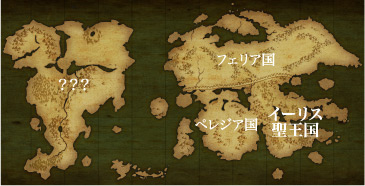 To the south east is the Holy Kingdom of Iris, a peaceful and tranquil nation ruled by Emelina, the Holy Queen. Long ago, the first Holy King of Iris vanquished the Evil Dragon using the treasured blade “Falchion”. The citizens of Iris worship Naga as their god and, because of their disdain of fighting, only a minimal amount of soldiers defend the country.

Krom is the prince of Iris, Emelina’s younger brother, and current wielder of the Falchion. When the neighbouring nation of Perezia begins acting suspiciously, he commands the vigilante force to keep his country at peace.

Perezia is located to the south west of the continent and is a theocracy devoted to the Evil Dragon Gimle, ruled by the war-hungry King Gangrel. The previous Holy King of Iris oppressed the citizens of Perezia for their worship of the Evil Dragon, causing them to despise Iris. This hatred has not changed even with Emelina’s peaceful rule. The barbarians of Perezia constantly encroach the borders of Iris, raiding villages–acts that can only fan the flames of war.

Under the double threat of Perezia and the corpse soldiers, Krom decides to travel north to seek Feria’s assistance. Unlike the peace-loving Iris, Feria is a militant nation that values strength over all things. Feria has two rulers–Flavia of the East and Basilio of the West–and their rulers are decided by their prowess in the grand fighting tournament.

Across the sea, to the west, lies the Continent of Varm, home to the Varm Empire. Valhart the Conqueror united the continent by force and rules over the mighty Varm Empire. The citizens of Varm worship the divine dragons and Tiki, a fabled divine dragon, is revered as a priestess.