Pair Up (“Double” in the Japanese version) is a gameplay mechanic that allows two units to combine together on the map. 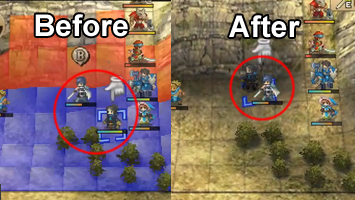 It works in a similar manner to the Rescue feature in previous games, so you can use it to transport low movement units across the map or pull out characters from dangerous situations. Unlike the traditional Rescue command, the Pair Up command is triggered by the unit wishing to standby and not the character who will be fighting–the “Lead Unit”.

Pairing up has additional benefits, as the Lead unit will gain stat bonuses when paired up, the bonus depending on the type of unit they’re paired with (e.g. pairing with a Mage mainly raises Magic) and the support level between the units. The standby unit will also act as a “Support Unit“, improving combat stats and occasionally dishing out Dual Strikes/Guards. The Lead and Support units may also switch roles on command.

When paired up, the Lead unit receives a bonus to their stats according to:

Note: There is no bonus for HP.

The Lead unit receives a matching stat bonus for each of the Support unit’s stats that are over a certain value.

Note: There is no bonus for Movement Only raw stats count, so temporary stat boosters (eg. Strength Tonic) or the stat-boosting Skills have no effect. Eg. If the Support unit has 40 Strength and 40 Magic, the Lead unit will receive +3 Strength and +3 Magic.

Additionally, the Lead unit receives a stat bonus according to the Support unit’s class.

Finally, the support level between the two characters modifies the Support unit’s class bonus (above).

Note: Move is not affected.

Chrom pairs up with your Avatar (Grandmaster) and they have an A support level together.