A special attack, which features in many of the games, usually reserved for the Pegasus sisters. In this game, two trios of characters can perform it: Thany, Tate and Yuno (the Pegasus sisters) and Bors, Wendy and Barth (the Armour Knight trio). 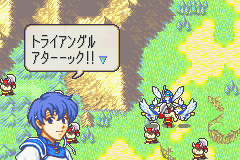 To activate it, position all three characters of a trio so that they are adjacent to the same enemy (like in the above screenshot). In this formation, making any of the characters attack will cause them to perform the Triangle Attack.

The Silver Card is hidden in the desert sand in Chapter 14. With the Silver Card in their inventory, a character can purchase items for half price. To find its location and more information, please check this page.

The Member Card is held by Hugh in Chapter 16. You can obtain it by either recruiting him (which costs 5,000 to 10,000 Gold) or making a Thief steal it from him. With the Member Card in their inventory, a character can enter Secret Shops (their locations can be found here), which sell rare items not usually found in normal shops.

Once the game has been completed once, the following changes occur:

Additionally, four limited-edition Trial Maps could be obtained in various events and competitions in Japan. 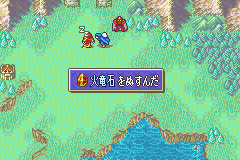 First, you will need to play a chapter where there is both an enemy staff-user, with a Berserk staff, and an enemy Mamkute. Chapters 22 and 23 should fulfill both criteria. Also you will need a Thief character. Make your Thief enter the staff-user’s range and let them become Berserked. Before the player’s turn ends, if the Mamkute is nearby, the Thief should move towards the Mamkute and steal their Fire Dragonstone.

Since the game doesn’t expect Fa to obtain a Fire Dragonstone, she doesn’t have a proper battle animation when attacking with it (instead, she becomes a discoloured floating dragon head).