The following timeline was translated from the Japanese official site. Prior to Echoes, there was no official timeline for Gaiden.

Approximately 3000 years before the story 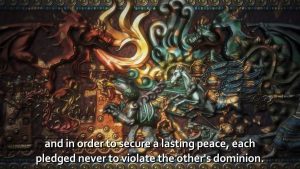 At the land of Valentia, the sibling gods Duma and Mila went to war. At the end of an arduous battle, Duma and Mila divided Valentia into two, the north ruled by Duma and the south ruled by Mila, with the two declaring to never invade the other. This was the covenant of the gods.

Year 1: A sage with knowledge of the celestial bodies’ motions introduced the notion of a calendar system to Mila, who acknowledged it. This year was chosen as the first year of the Valentian Calendar.

Year 189: The Rigelian Empire was established in the northern region ruled by Duma and the Kingdom of Zofia was built on the southern lands ruled by Mila.

Year 374: The young Rudolf was appointed as the successor of the Rigelian Empire’s Emperor Rigel III. He ascended as Emperor Rudolf I.

Year 382: King Lima III of Zofia perished. Although his eldest son Lima IV was crowned, he had little interest in politics and the villainous Desaix secured the position of Chancellor.

Year 398: Poor harvests caused the food-stocks of the Rigelian Empire to run dry. Rigel’s request for assistance from Zofia were met with rejection. Rudolf I himself led the troops to invade Zofia. Rigel and Zofia entered all-out war.

Year 399: The inexperienced Zofian army were repeatedly defeated by the overwhelming Rigelian forces and Rigel steadily crept into Zofian territory. Desaix managed to contact the upper echelon of the Rigelian Army and negotiated a cease-fire in exchange for a large compensatory sum of gold. The Rigelian Army remained garrisoned in Northern Zofia and tensions continued to grow.

Year 400: Desaix triggered a coup d’etat, and the Zofian royal family including Lima IV were assassinated one after the other. The Deliverance was established by the Zofian nobility who opposed Desaix, with Clive as its leader.