Notes: Additional details will be added to the Chapter data pages.

This is a remake of BS Fire Emblem: Archanean Chronicles, four standalone chapters that were originally released for the Satellaview add-on for the Super Famicom (SNES) and broadcasted for a limited time only. It can be accessed from the Extras menu after Prologue 8 of the main campaign has been completed. For more information on the original games, please check this page. These chapters take place chronologically before Shadow Dragon. They are not affected by nor do they affect the main campaign.

Major Changes from the Originals

Episode 1: Fall of the Palace

During the War of Shadows… The royal palace of Saint Archanea, the largest nation on the continent, fell into a hopeless situation after being mercilessly attacked by Dolhr’s army, led by the Shadow Dragon Medeus. As the footsteps of the imperial soldiers start to be heard in the palace interior, the helpless king of Archanea sends a secret missive to bishop Boah. Playable characters: Nyna, Boah, Midia, Dolph, Macellan, Tomas

The Kingdom of Aurelis is situated at the north-eastern grasslands of Archanea. Since its founding, this bountiful nation has shared extremely strong ties with the holy kingdom of Archanea. However, under the fierce offence of Macedon’s Dragoons, led by Princess Minerva, it has already relinquished half of its territory. As Princess Minerva and her subordinates pass by a village along their way back to their post at Aurelis… Playable characters: Minerva, Catria, Est, Hardin, Wolf, Roshea, Frost

Many days have passed since the Archanean royal palace fell to Dolhr’s forces. At the streets outside the palace, a male and female pair emerge. They are Rickard and Lena. Playable characters: Rickard, Navarre, Lena, Castor, Maris, Dice 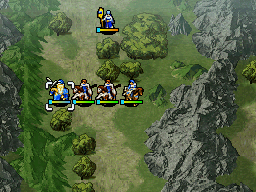 Archanea’s royal palace, also known as the millennial palace, has been occupied by Grust’s Sable Knight, Camus, for a period of 2 years. Although Dolhr’s Emperor Medeus ordered Camus to command at the palace, Camus ended up betraying Medeus’s orders by keeping Princess Nyna hidden away. Angered by Camus’s action, Medeus issues an order to his subordinate. Playable characters: Camus, Nyna, Robert, Belf, Leiden

The sum of the four ranks below.

Number of chests opened or villages visited by playable characters.

Number of playable characters alive at the end.